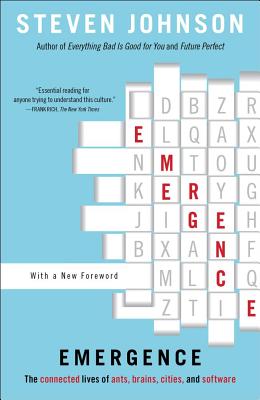 
Usually Ships in 1-5 Days
In the tradition of Being Digital and The Tipping Point, Steven Johnson, acclaimed as a "cultural critic with a poet's heart" (The Village Voice), takes readers on an eye-opening journey through emergence theory and its applications.

A NEW YORK TIMES NOTABLE BOOK
A VOICE LITERARY SUPPLEMENT TOP 25 FAVORITE BOOKS OF THE YEAR
AN ESQUIRE MAGAZINE BEST BOOK OF THE YEAR
Explaining why the whole is sometimes smarter than the sum of its parts, Johnson presents surprising examples of feedback, self-organization, and adaptive learning. How does a lively neighborhood evolve out of a disconnected group of shopkeepers, bartenders, and real estate developers? How does a media event take on a life of its own? How will new software programs create an intelligent World Wide Web?

In the coming years, the power of self-organization -- coupled with the connective technology of the Internet -- will usher in a revolution every bit as significant as the introduction of electricity. Provocative and engaging, Emergence puts you on the front lines of this exciting upheaval in science and thought.
Steven Johnson is the bestselling author of Interface Culture, Emergence, and Everything Bad Is Good for You as well as a columnist for Discover and a contributing editor at Wired. He lives in New York City with his wife and two sons, and can be reached via the Web at www.stevenberlinjohnson.com.
Michiko Kakutani The New York Times Book Review Johnson once again demonstrates his range as a cultural historian....stimulating reading.

Edward Dolnick The Washington Post Johnson is a clear, lively writer with an aversion to jargon and a knack for crafting offbeat analogies....clever and thought-provoking.

David Pogue The New York Times Johnson opens our eyes to swarm-logic behavior in our own lives...with wit, clarity, and enthusiasm.