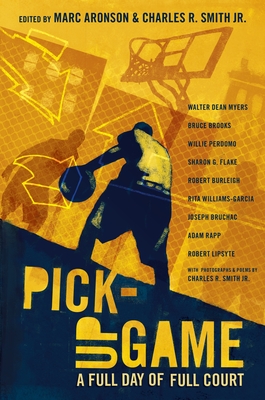 Pass! Shoot! Swish! And 1! An all-star team of YA authors scores spectacularly with an action-packed anthology about street basketball.

It’s one steamy July day at the West 4th Street Court in NYC, otherwise known as The Cage. Hotshot ESPN is wooing the scouts, Boo is struggling to guard the weird new guy named Waco, a Spike Lee wannabe has video rolling, and virgin Irene is sizing up six-foot-eightand-a-half-inch Chester. Nine of YA literature’s top writers, including Walter Dean Myers, Rita Williams-Garcia, Adam Rapp, Joseph Bruchac, and Sharon Flake reveal how it all goes down in a searing collection of short stories, in which each one picks up where the previous one ends. Characters weave in and out of narratives, perspectives change, and emotions play out for a fluid and fast-paced ode to the game. Crackling with humor, grit, and streetball philosophy, and featuring poems and photographs by Charles R. Smith Jr., this anthology is a slam dunk.
Marc Aronson is an editor and author of many award-winning books for young people, including War Is. . . . Soldiers, Survivors, and Storytellers Talk About War, which he coedited with Patty Campbell, and Sugar Changed the World, which he cowrote with Marina Budhos. Marc Aronson lives in New Jersey.

Charles R. Smith, Jr., is the author and photographer of Winning Words: Sports Stories and Photographs and the author of Hoop Queens, Hoop Kings, Chameleon, and Twelve Rounds to Glory: The Story of Muhammad Ali, winner of a Coretta Scott King Author Award Honor. He won the 2010 Coretta Scott King Illustrated Award for this photogrphas illustrating My People by Langston Hughes. He lives in Poughkeepsie, New York.
Nine all-stars in the field of YA lit contribute stories...an anthology of standalone stories that invite - no, demand - a straight read-through.
—Bulletin of the Center for Children's Books (starred review)

Tying all the stories together is a shared love and respect not only for the game itself, but also for the lavishly talented (and all-too-often fatally flawed) legends od New York City playground basketball. An outstanding collection that belongs in every high school library.
—School Library Journal (starred review)

Superb stories by writers who know and love the game; and ode to the show.
—Kirkus Reviews (starred review)