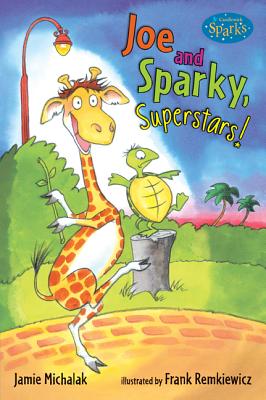 The unlikely duo return in a very funny tale of friendship, derring-do, and the discovery that, bold or shy, anyone can become a superstar.

When fun-seeking Joe, a giraffe, takes a reluctant Sparky, a turtle, on a wild ride across the famous cageless zoo to see a mysterious box displaying a talent show, the two decide they must compete to be the next famous pair. But what are their talents? Joe can run fast, wiggle his ears, and touch his nose with his tongue (not to mention drive a car). But Sparky doesn’t know what his special skill is. Can the enthusiastic encouragement of Joe the World’s Best Talent Finder help the retiring Sparky become a star?

Jamie Michalak is the author of Joe and Sparky Get New Wheels and the Brand New Readers book Larry and Rita. She says, "Turtles rarely get the spotlight, so I wanted to write a story that gave Sparky the attention turtles have long deserved. Little did I know that he'd have such an astounding hidden talent." Jamie Michalak lives in Barrington, Rhode Island.

Frank Remkiewicz has illustrated many books for children, including Joe and Sparky Get New Wheels and Piggy and Dad Go Fishing. He lives on the Gulf Coast of Florida.

Being in on a joke is a treat for young readers, and this little treasure is one that will get passed around.
—Kirkus Reviews (starred review)