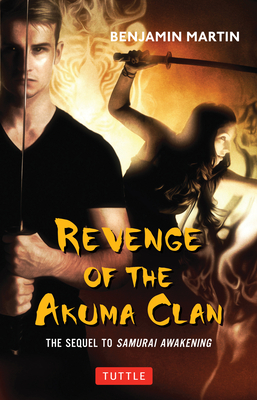 It's time for Revenge. Benjamin Martin, author of the 2011 Amazon Breakthrough Novel Award semi-finalist Samurai Awakening, returns with another masterpiece of young adult fiction and the next installment in his riveting shapeshifter saga. American teenager David Matthews has more to deal with than the average exchange student living in Japan--a lot more. In Samurai Awakening, David woke one morning to discover that he'd been empowered and possessed by the tiger god Kou. Now a Jitsugen Samurai in Revenge of the Akuma Clan and able to take on Kou's form, David must use his new abilities to protect Japan from the terrifying evil creeping across the land--and waiting for him to fail. As his relationships, especially with Rie his host sister, grow uncertain, he must forge deeper connections with Kou, the tiger god that resides with him, and form new alliances if he hopes to hold back the return of Japan's ancient enemies. It is up to David to stop the powerful and vengeful Akuma Clan--and time is running out.
Benjamin Martin has studied Japanese language and culture for more than ten years. In 2008, he moved to Okinawa, where he created the popular blog More Things Japanese and continues to live and teach. Visit SamuraiAwakening.com for more information.