Finland and Europe: The Period of Autonomy and the International Crises, 1808-1914 (The Nordic Series #7) (Paperback) 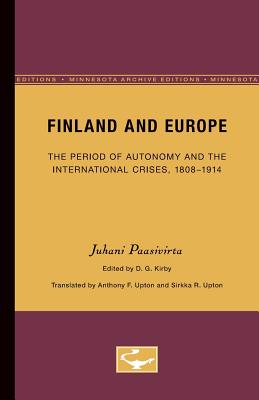 Finland and Europe: The Period of Autonomy and the International Crises, 1808-1914 (The Nordic Series #7) (Paperback)

Finland and Europe was first published in 1982. Minnesota Archive Editions uses digital technology to make long-unavailable books once again accessible, and are published unaltered from the original University of Minnesota Press editions.

In 1808 the Grand Duchy of Finland, part of the Swedish kingdom since the thirteenth century, was invaded and in 1809 annexed by Russia -- events which took place within the context of the Napoleonic wars but whose significance was obscure to most Finns and to the outside world as well. During the nineteenth century Finnish national identity grew and Finland began to play a role in European politics. This book traces the course of Finnish involvement in European affairs from the time when it became an autonomous Grand Duchy within the Russian Empire down to the First World War. Juhani Paasivirta's analysis is centered upon eleven international crises, including the Russian annexation of Finland, the fall of Napoleon, two revolutions in Poland, the revolutions of 1848, the Franco-Prussian War and the Paris Commune, the Russo-Turkish and Russo-Japanese wars, and the outbreak of the First World War.

Paasivirta writes from two vantage points: he records the reactions to these events in Finland, across a broad social and economic spectrum, and the attitudes towards the 'Finnish situation' in Sweden, England, France, and Germany. Finland's relationship with Russia, and her necessarily realistic regard for the security of the Russian Empire were important matters faced by Finnish leaders; Paasivirta shows how this delicate relation collapsed, making way for a course that led to Finnish independence in 1917.

D.G. Kirby is a professor in the School of Slavonic Studies, University of London, and the author of Finland in the Twentieth Century.