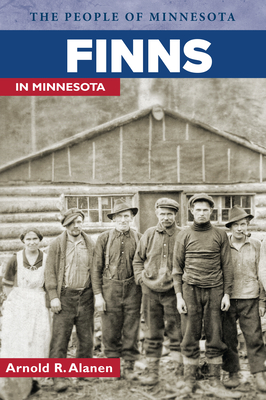 The first Finnish immigrants arrived in R ed Wing in 1864, the vanguard of thousands who eventually and resolutely placed Minnesota second among the states in terms of Finnish population. Today we may recognize Minnesota’s “Finnishness” in the popular sauna, in the characteristic tenacity known as sisu, or in place names and cultural markers that link to homeland. The newest contribution to the People of Minnesota series traces the Finns’ migration to the state, particularly its northeastern region; their log construction techniques, including dovetail notching; and their ethnic organizations, from religious to political to fraternal. Colorful sidebars enliven the narrative, highlighting such topics as “Finglish,” New World legends, and the 1920s Olympic competitors in track and field known as the “Flying Finns.”

A separate thread tells the story of the Finland Swedes—“the minority within a minority” whose members were born in Finland but spoke Swedish and thus straddled two ethnic groups, belonging fully to neither. The book concludes with a personal narrative of Fred Torma (1888–1979), a miner and carpenter from Nashwauk, who describes establishing a Socialist hall, involvement in the 1907 Mesabi strike, and founding a cooperative boardinghouse and store. His is just one engaging example of the vibrant lives and legacy of Finnish Americans in Minnesota.