A Knock on the Door: The Essential History of Residential Schools from the Truth and Reconciliation Commission of Canada (Abridged / Paperback) 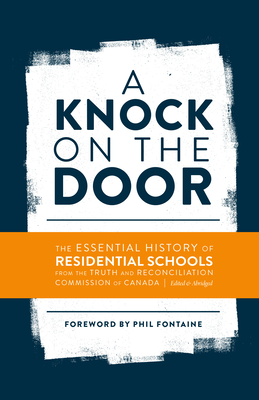 A Knock on the Door: The Essential History of Residential Schools from the Truth and Reconciliation Commission of Canada (Abridged / Paperback)


Usually Ships in 1-5 Days
“It can start with a knock on the door one morning. It is the local Indian agent, or the parish priest, or, perhaps, a Mounted Police officer.” So began the school experience of many Indigenous children in Canada for more than a hundred years, and so begins the history of residential schools prepared by the Truth & Reconciliation Commission of Canada (TRC). Between 2008 and 2015, the TRC provided opportunities for individuals, families, and communities to share their experiences of residential schools and released several reports based on 7000 survivor statements and five million documents from government, churches, and schools, as well as a solid grounding in secondary sources.

A Knock on the Door, published in collaboration with the National Research Centre for Truth & Reconciliation, gathers material from the several reports the TRC has produced to present the essential history and legacy of residential schools in a concise and accessible package.

Survivor and former National Chief of the Assembly First Nations, Phil Fontaine, provides a Foreword, and an Afterword by Aimée Craft introduces the holdings and opportunities of the National Centre for Truth & Reconciliation, home to the archive of recordings, and documents collected by the TRC.

The Truth and Reconciliation Commission of Canada was established in 2008 and led by the Honourable Justice Murray Sinclair (Chair), Dr. Marie Wilson, and Chief Wilson Littlechild.

Phil Fontaine is a Survivor, TRC honorary witness, and former National Chief of the Assembly of First Nations.

Aimée Craft is the Director of Research at the National Centre for Truth and Reconciliation and an associate professor in the Faculty of Law at the University of Manitoba. She is the author of Breathing Life into the Stone Fort Treaty.
“There are good and bad things in our society, successes and failures. But there is only one fundamental reality that remains unaddressed. That is the situation of indigenous peoples. This is the single most important issue before us, whether we are recently arrived in Canada or have been here for centuries. This is the prime issue on which we should be judging governments and potential governments.”
John Ralston Saul The Globe and Mail


“The attempt to transform us failed. The true legacy of the survivors, then, will be the transformation of Canada.”
Phil Fontaine, from the Foreword