On Desperate Ground: The Epic Story of Chosin Reservoir--the Greatest Battle of the Korean War (Paperback) 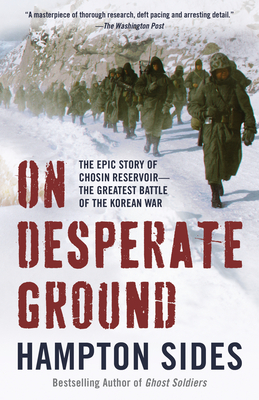 On Desperate Ground: The Epic Story of Chosin Reservoir--the Greatest Battle of the Korean War (Paperback)


On Our Shelves Now
"Superb...A masterpiece of thorough research, deft pacing and arresting detail...This war story — the fight to break out of a frozen hell near the Chosin Reservoir — has been told many times before. But Sides tells it exceedingly well, with fresh research, gritty scenes and cinematic sweep."—Washington Post

From the New York Times bestselling author of Ghost Soldiers and In the Kingdom of Ice, a chronicle of the extraordinary feats of heroism by Marines called on to do the impossible during the greatest battle of the Korean War

On October 15, 1950, General Douglas MacArthur, Supreme Commander of UN troops in Korea, convinced President Harry Truman that the Communist forces of Kim Il-sung would be utterly defeated by Thanksgiving. The Chinese, he said with near certainty, would not intervene in the war.

As he was speaking, 300,000 Red Chinese soldiers began secretly crossing the Manchurian border. Led by some 20,000 men of the First Marine Division, the Americans moved deep into the snowy mountains of North Korea, toward the trap Mao had set for the vainglorious MacArthur along the frozen shores of the Chosin Reservoir. What followed was one of the most heroic--and harrowing--operations in American military history, and one of the classic battles of all time. Faced with probable annihilation, and temperatures plunging to 20 degrees below zero, the surrounded, and hugely outnumbered, Marines fought through the enemy forces with ferocity, ingenuity, and nearly unimaginable courage as they marched their way to the sea.

Hampton Sides' superb account of this epic clash relies on years of archival research, unpublished letters, declassified documents, and interviews with scores of Marines and Koreans who survived the siege. While expertly detailing the follies of the American leaders, On Desperate Ground is an immediate, grunt's-eye view of history, enthralling in its narrative pace and powerful in its portrayal of what ordinary men are capable of in the most extreme circumstances.

Hampton Sides has been hailed by critics as one of the best nonfiction writers of his generation. As the Miami Herald wrote, "Sides has a novelist's eye for the propulsive elements that lend momentum and dramatic pace to the best nonfiction narratives."
HAMPTON SIDES is an award-winning editor of Outside and the author of the bestselling histories In the Kingdom of Ice, Hellhound On His Trail, Blood and Thunder, and Ghost Soldiers, which won the PEN Award for Nonfiction. A past fellow of the Santa Fe Institute, he teaches narrative non-fiction at Colorado College.
"Superb...a masterpiece of thorough research, deft pacing and arresting detail...Sides shows how brave Marines — officers and grunts — innovated, organized and blasted their way out of the trap their fabulously famous boss had helped set. This war story — the fight to break out of a frozen hell near the Chosin Reservoir — has been told many times before. But Sides tells it exceedingly well, with fresh research, gritty scenes and cinematic sweep."
—Washington Post

“To this pantheon [of the best books on the Korean War] we can now add Hampton Sides’ On Desperate Ground, which hits all the right notes...It’s a story Marines are rightly proud of and one that should be of interest to anyone who wants to know more about the remains that just returned home from Korea, and why those men deserve to be remembered.”
—Wall St. Journal

“Excellent…On Desperate Ground is a first-rate work of military history, and its combat narratives are rich with individual stories of danger, bravery, loss, survival and wrenching poignancy.”
—Dallas Morning News

“Sides’ brilliant reporting and crisp storytelling provides a backdrop for events on the world stage almost 70 years later…It’s an epic worthy of Homer…In their will to survive the Americans are just as crafty as their Greek forebears.”
—Santa Fe New Mexican

“Hampton Sides's On Desperate Ground is a heart-pounding, fiercely written account of the brutal Chosin Reservoir Campaign during the Korean War. Every page pulsates with drama. Sides, an American master of nonfiction, has written one of the finest battle books ever."
—Douglas Brinkley, New York Times bestselling author of Rightful Heritage and The Wilderness Warrior

“On Desperate Ground is a masterpiece of war history, a sweeping and powerfully drawn epic of the Korean War and its mightiest battle. The astonishing heroism, resourcefulness, and grit of the Marines trapped at Chosin Reservoir boggles the mind, and Hampton Sides’s telling of the story largely through the voices of those who fought (including Koreans) makes for a spellbinding and moving narrative. One of the most harrowing accounts of war I have ever read, this book is destined to become a classic.”
—Douglas Preston, #1 New York Times bestselling author of The Lost City of the Monkey God

“What a book! Through moment-by-moment, intensely-researched details, On Desperate Ground utterly immerses the reader in this harrowing battle. Hampton Sides gives us a better understanding of the history behind current U.S. relations with Korea and China while offering a series of captivating profiles in human courage—an absolutely riveting read.”
—Anthony Doerr, Pulitzer Prize-winning author of All the Light We Cannot See