The Sociology of Karl Mannheim: With a Bibliographical Guide to the Sociology of Knowledge, Ideological Analysis, and Social Planning (Routledge Library Editions: Social Theory #76) (Hardcover) 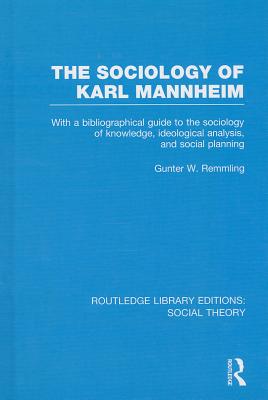 The Sociology of Karl Mannheim: With a Bibliographical Guide to the Sociology of Knowledge, Ideological Analysis, and Social Planning (Routledge Library Editions: Social Theory #76) (Hardcover)

Karl Mannheim (1893-1947) occupies a prominent position among the leading social scientists of the twentieth century; his ideas and his books are relevant for many issues engaging the concern of sociologists today. Mannheim's life spanned three cultural traditions - Hungarian, German and British - and in this authoritative study Professor Remmling covers all these phases in his life and work.

Mannheim began as an idealistic philosopher, but soon began to make important contributions to the developing area of sociology of knowledge. After his emigration to England in 1933, Mannheim developed a theory of social planning to combat the socio-political consequences of the crisis of liberalism. During the Second World War his attention shifted to the ethical and religious values of Western humanism and the related role of mass education in democratic social planning. Finally, Mannheim forged the rudiments of a political sociology attacking the abuse of politico-military power and the resulting danger of a third world war, while simultaneously calling for counter-attack under the banner of planning for freedom on behalf of militant, fundamental democracy. In tracing these development in Karl Mannheim's work, Gunter Remmling provides insights into major theoretical and practical issues of the first half of the twentieth century, problems which remain central to the modern experience.

A comprehensive bibliography is provided to introduce the sociology of knowledge and related topics, such as ideology, utopia, intellectuals, Weimar culture, and social planning.