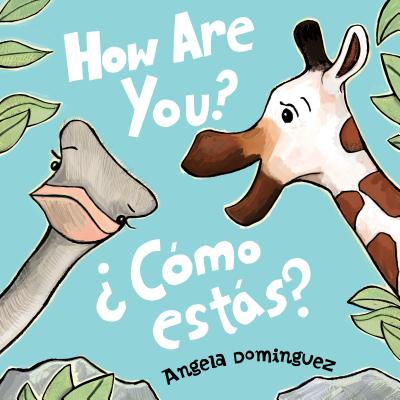 Friendship awaits in this bilingual book about feelings, How Are You? / ¿Cómo estás? by Angela Dominguez-- expressed both in English and in Spanish.

When two giraffe friends find a baby ostrich, they have some questions. Is baby ostrich hungry? Shy? Tired? Ostrich says no! So how does she feel?

Angela Dominguez was born in Mexico City, grew up in the great state of Texas, and now resides on the east coast. She is the author and illustrator of several books for children including Maria Had a Little Llama, which received the American Library Association Pura Belpré Illustration Honor. Recently, she received her second Pura Belpré Honor for her illustrations in Mango, Abuela, and Me written by Meg Medina. When Angela is not in her studio, she teaches at the Academy of Art University, which honored her with their Distinguished Alumni Award in 2013. She also enjoys presenting at different schools and libraries to all sorts of ages. Angela is a proud member of SCBWI, PEN America, and represented by Wernick and Pratt Literary Agency. As a child, she loved reading books and making a mess creating pictures. She's delighted to still be doing both.

"First introduced to this friendly pair of giraffes—one Spanish-speaking,the other Anglophone—in How Do You Say? / ¿Cómo se dice?, readers now find them greeting an ostrich . . . . Here's hoping these endearing giraffes will continue making plenty of amigos." —Kirkus Reviews

"Young children will delight in the antics of two endearing giraffes in this bilingual picture book." —School Library Journal

"This charming story is as light as air yet carries heft." —Kirkus Reviews

"As appealing to look at as it is to listen to, this book . . . provides opportunities to bring together those learning English, learning Spanish, or just learning how to make new friends and amigos." —The Horn Book