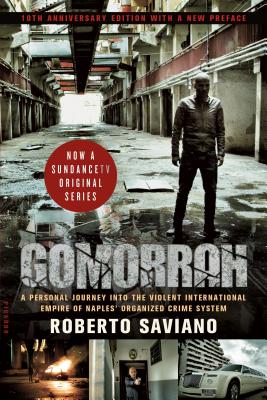 Gomorrah is a bold and important work of investigative writing that holds global significance, one heroic young man's impassioned story of a place under the rule of a murderous organization.

A groundbreaking, unprecedented bestseller in Italy, Roberto Saviano's insider account traces the decline of the city of Naples under the rule of the Camorra, an organized crime network more powerful and violent than the Mafia. The Camorra is an elaborate, international system dealing in drugs, high fashion, construction, and toxic waste, and its influence has entirely transformed life in Campania, the province surrounding Naples.

Since seeing his first murder victim, at thirteen, Roberto Saviano has watched the changes in his home city. For Gomorrah, he disappeared into the Camorra and witnessed up close the drug cartel's audacious, sophisticated, and far-reaching corruption that has paralyzed his home city and introduced the world to a new breed of organized crime.

Roberto Saviano was born in Naples and studied philosophy at university. Gomorrah: A Personal Journey into the Violent International Empire of Naples' Organized Crime System was his first book. In 2011 he was awarded the PEN Pinter International Writer of Courage Award.

“The most important book to come out of Italy in years....I could not get this brave book out of my head.”—The New York Times Book Review

“Astonishing...Gripping...[Saviano] exhibits the passion and heroism of a young man.”—The Washington Post

“Read this important book and you will appreciate why Italy is still a country that needs heroes like [Saviano].”—The Guardian (UK)

“An Engrossing book, animated by a fervor that's uncommon in American investigative reporting...As much a literary lament as a gritty exposé.”—Mother Jones