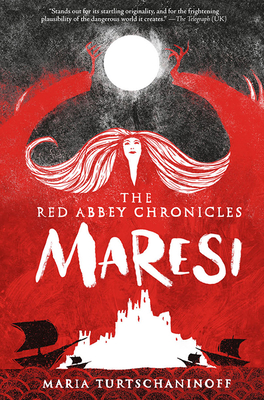 This is a wonderful fantasy novel, translated from the Finnish. The island of The Red Abbey, in which only women may step, is steeped in tradition. Beautifully written, this is a rich coming of age story with real depth. You can read more about the book here.

— From DDG Store Favorites Middle Grade & YA
Only women and girls are allowed in the Red Abbey, a haven from abuse and oppression. Maresi, a thirteen-year-old novice there, arrived in the hunger winter and now lives a happy life in the Abbey, protected by the Mother and reveling in the vast library in the House of Knowledge, her favorite place. Into this idyllic existence comes Jai, a girl with a dark past. She has escaped her home after witnessing the killing of her beloved sister. Soon the dangers of the outside world follow Jai into the sacred space of the Abbey, and Maresi can no longer hide in books and words but must become one who acts.  Bound for international success, Maresi will be published in 15 territories around the world!
Maria Turtschanino has been writing fairy tales since the age of five. She has been awarded the Finlandia Junior Prize, the Swedish YLE Literature Prize, and the Society of Swedish Literature Prize, the latter on two occasions. She has also been nominated for the Astrid Lindgren Memorial Award. Turtschanino has a Master of Arts in human ecology and works full-time as a writer. She lives in Finland.
“The novel is at once contemporary and timeless. Its unwavering feminism is resolutely modern, resonating with a range of texts from Ursula Le Guin’s 2001 Tales from Earthsea to Disney’s Frozen. At the same time, it feels authentically ancient and mythic."
— The Guardian (UK)

"It's hard not to be impressed with Turtschaninoff's magical world."
— The Times (UK)

"'Where YA fantasy can start to feel a little same-y, Maresi stands out for its startling originality, and for the frightening plausibility of the dangerous world it creates."
— Telegraph (UK)

"Turtschaninoff puts traditional elements of female magic to effective dramatic use, especially in the climactic (and climatic) conflict between Jai’s
father and the Sisters. But what’s more impressive about this fantasy is the subtlety with which the serenity of the island and its way of life is established—through the calls of birds, the sounds of the lapping sea, the smoothness of driftwood."
— The Horn Book

"Readers seeking a fresh, unusual fantasy setting and voice will likely appreciate this haunting literary detour."
— Bulletin of the Center for Children's Books