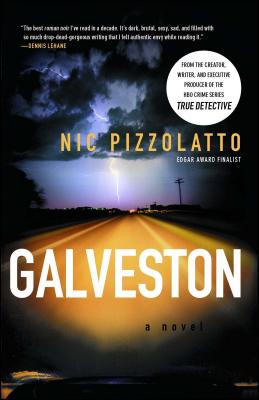 
Usually Ships in 1-5 Days
From the creator, writer, and executive producer of the HBO crime series True Detective, comes a dark and visceral literary debut set along the seedy wastelands of Galveston.

On the same day that Roy Cady is diagnosed with a terminal illness, he senses that his boss, a dangerous loan-sharking bar-owner, wants him dead. Known “without affection” to members of the boss’s crew as “Big Country” on account of his long hair, beard, and cowboy boots, Roy is alert to the possibility that a routine assignment could be a deathtrap. Which it is. Yet what the would-be killers do to Roy Cady is not the same as what he does to them, which is to say that after a smoking spasm of violence, they are mostly dead and he is mostly alive.

Before Roy makes his getaway, he realizes there are two women in the apartment, one of them still breathing, and he sees something in her frightened, defiant eyes that causes a fateful decision. He takes her with him as he goes on the run from New Orleans to Galveston, Texas—an action as ill-advised as it is inescapable. The girl’s name is Rocky, and she is too young, too tough, too sexy—and far too much trouble. Roy, Rocky, and her sister hide in the battered seascape of Galveston’s country-western bars and fleabag hotels, a world of treacherous drifters, pickup trucks, and ashed-out hopes. Any chance that they will find safety there is soon lost. Rocky is a girl with quite a story to tell, one that will pursue and damage Roy for a very long time to come.

Recalling the moody violence of the early novels of Cormac McCarthy and Denis Johnson, this powerful, potent, and atmospheric thriller is impossible to put down. Constructed with maximum tension and haunting aftereffect, written in darkly beautiful prose, Galveston announces the arrival of a major new literary talent.
Nic Pizzolatto is the creator, writer, and executive producer of the HBO crime series True Detective. His fiction has appeared in The Atlantic, The Oxford American, The Missouri Review, The Iowa Review, Best American Mystery Stories, and other publications. His written work has been a finalist for the National Magazine Award, and his story collection Between Here and the Yellow Sea was named by Poets & Writer’s Magazine as one of the top five fiction debuts of the year. He lives in Los Angeles. Galveston is his first novel.
"An often incandescent fever dream of low-rent, unbearable beauty.... Galveston, in its authenticity and fearless humanism, recalls only the finest examples of the form." - New York Times Book Review