The Memory of After (The Memory Chronicles #1) (Paperback) 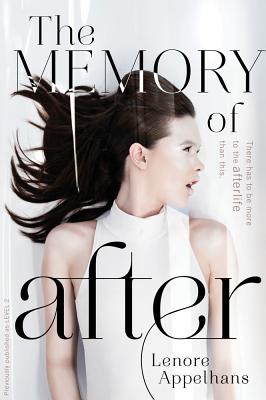 The Memory of After (The Memory Chronicles #1) (Paperback)

This is book number 1 in the The Memory Chronicles series.

In this gripping exploration of a futuristic afterlife, a teen discovers that death is just the beginning.

Since her untimely death, Felicia Ward has been trapped in Level 2, a stark white afterlife located between our world and the next. Along with her fellow drones, Felicia passes the endless hours reliving memories of her time on Earth and mourning what she’s lost—family, friends, and Neil, the boy she loved.

Then a girl in a neighboring chamber is found dead, and nobody but Felicia recalls that she existed in the first place. When Julian—a dangerously charming guy Felicia knew in life—appears to offer Felicia a way out, Felicia learns the truth: if she joins the rebellion to overthrow the Morati, the angel guardians of Level 2, she can be with Neil again.

Suspended between Heaven and Earth, Felicia finds herself at the center of an age-old struggle between good and evil. As memories from her life come back to haunt her, and as the Morati hunt her down, Felicia will discover it’s not just her own redemption at stake…but the salvation of all mankind.

Previously published as Level 2.
Lenore Appelhans has been blogging about books since 2008. After reviewing hundreds of them, she decided to write one. She is the author of The Memory of After, The Best Things in Death (an e-short story), and Chasing Before. Lenore also wrote Chick-o-Saurus Rex, a picture book illustrated by her husband, Daniel Jennewein. She lives in Frankfurt, Germany, but loves to travel, so you can often find her on planes—at least until she learns how to teleport. Visit her online at PresentingLenore.Blogspot.com and on Twitter @LenorEva.
"Readers will root for Felicia and Neil....The way Appelhans mixes memory with plot is exceptional."
— Romantic Times

“Absolutely gripping. My heart pounded on nearly every page. You won't be able to put it down.”
— Mary E. Pearson, award-winning author of the Jenna Fox Chronicles

“Appelhans brings the afterlife to a whole new level. . . . A high-voltage thrill ride through love, death, and memory that will leave you breathless.”
— Jess Rothenberg, author of The Catastrophic History of You and Me

“A gripping debut! This utterly unique take on the afterlife poses fascinating questions . . . I can't wait to read the rest of the series to find out the answers!”
— Megan McCafferty, New York Times bestselling author of Bumped and Thumped