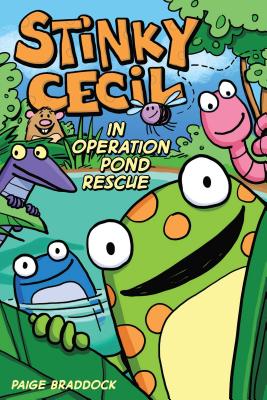 This is book number 1 in the Stinky Cecil series.

"Funny and lovable! The characters in Stinky Cecil's pond world are honest, determined, loyal, and hilarious--especially when they forget themselves and act like real animals! I can¹t wait for more adventures!"
--Jeff Smith, creator of Bone

Sometimes big stories happen in small places. Sometimes big things happen to small creatures. This is one of those stories . . .

Cecil is a toad. A toad busy doing what any other toad does with its days--judging the pond splashing contest (Reggie the fly is usually the honorary winner by dint of his five-day lifespan), or visiting his friends, Jeff the free-range hamster, Rayray the lizard, Jeremy the worm, or Sprout the frog. And, of course, trying to keep clear of the local hawk.

But when Cecil discovers a freeway construction project aimed right at the pond, he knows he has to come up with a plan to save his home. But what can a small group of amphibians and a reincarnating fly do against construction vehicles and a steady onslaught of hot asphalt? Cecil isn't sure, but he knows they have to try.
Paige Braddock is the Creative Director at Charles M. Schulz Creative Associates.  Braddock had the opportunity to train under Schulz, her childhood hero, prior to his retirement. She has illustrated several “Peanuts” children’s books, the Snoopy U.S. postage stamp issued in 2001, and the Newsweek cover featuring Snoopy following  Schulz’s death in 2000.
A “wry eco fable.” (Kirkus Reviews)

"The minute I finished reading this graphic novel, I knew I had a winning title in my hand...The artwork is adorable. Clear crisp lines and uncomplicated panels just tell a good story. The story is so much fun and so entertaining that young readers might not realize how much they’re learning about the ecosystem and how dependent living things are on each other. But this is a perfect introduction for a science teacher." (Esther Keller, School Library Journal's "Good Comics for Kids" blog)

"The large-paneled art and cartoonlike illustrations complement the tone of the story well, which blends weighty themes such as life deforestation and habitat destruction with the light and often hilarious dialogue. Braddock organically works in facts about the animals, but no lesson is too lofty or overstated that it takes away from the book’s flow…This work should appeal to a wide variety of readers—especially science teachers—because of its focus on habitats, deforestation, and endangered species.” (School Library Journal)

“…Braddock has written a charming, funny and somehow educational book with great artwork.  What more do you want from a book for kids?” (Brian Cronin, Comic Book Resources)