The Antidote: Inside the World of New Pharma (Paperback) 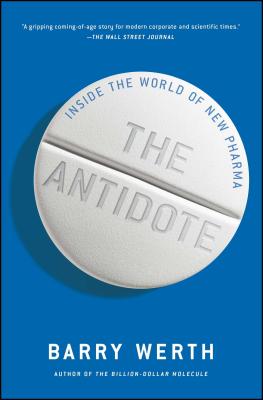 The Antidote: Inside the World of New Pharma (Paperback)


Usually Ships in 1-5 Days
In this timely and much praised book, Barry Werth draws upon inside reporting that spans more than two decades. He provides a groundbreaking close-up of the upstart pharmaceutical company Vertex and the ferocious but indispensable world of Big Pharma that it inhabits.

In 1989, the charismatic Joshua Boger left Merck, then America’s most admired business, to found a drug company that would challenge industry giants and transform health care. Werth described the company’s tumultuous early days during the AIDS crisis in The Billion-Dollar Molecule, a celebrated classic of science and business journalism. Now he returns to tell a riveting story of Vertex’s bold endurance and eventual success.

The $325 billion-a-year pharmaceutical business is America’s toughest and one of its most profitable. It’s riskier and more rigorous at just about every stage than any other business, from the towering biological uncertainties inherent in its mission to treat disease; to the 30-to-1 failure rate in bringing out a successful medicine even after a molecule clears all the hurdles to get to human testing; to the multibillion-dollar cost of ramping up a successful product; to operating in the world’s most regulated industry, matched only by nuclear power.

Werth captures the full scope of Vertex’s twenty-five-year drive to deliver breakthrough medicines. At a time when America struggles to maintain its innovative edge, The Antidote is a powerful inside look at one of the most intriguing and important business stories of recent decades.
Barry Werth is an award-winning journalist and the acclaimed author of six books. His landmark first book, The Billion-Dollar Molecule, recounts the founding and early struggles of Vertex. Werth’s articles have appeared in The New Yorker, The New York Times Magazine, and GQ, among others. He has taught journalism and nonfiction writing at Smith, Mount Holyoke, and Boston University.
"A riveting mix of molecular science, big personalities—and big money."
— Nature

“Barry Werth’s new book does for the world of biotech drug development what The Soul of a New Machine did for the dawn of the computer age. It presents an exciting narrative about the business of bringing new products to market.”
— Boston Globe

“You can read The Antidote as a book about predicaments encountered by just about any company whose future depends on constant innovation. Yet, given Mr. Werth's welcome attention to personalities and circumstances—as well as to the recalcitrance of particular molecules and particular suffering bodies—you can also take the book at face value, as a story about what happened in one company in one fairly short period of time. ... The vividness and rich detail of "The Antidote" make it a gripping coming-of-age story for modern corporate and scientific times.”
— The Wall Street Journal

“Werth's excellent writing takes the reader deep into the heart of Vertex and into the dilemma facing the biotech pioneers, and us all.”
— Fortune

“Werth keeps a brisk pace, describing Vertex as the antidote to older pharma and Merck in particular. He infuses the book with drama, even managing to make a regulatory meeting seem exciting.”
— The Economist

“The book is an in-depth look at a company in a daunting, high-stakes, highly regulated business in which science, commerce and politics intersect.”
— Pittsburgh Tribune

“Werth very aptly captured the drama of the pharmaceutical industry … Werth was able to obtain extraordinary inside information on the workings of the pharmaceutical industry. He was able to capture the emotional and psychological state of the players, the day-to-day workings of the companies with failures and successes of research, as well as collaborations with other companies and acquisitions. … Succinct and understandable.”
— New York Journal of Books

“Werth doesn’t shy away from technical details, and The Antidote has plenty of “inside baseball” for pharma industry cognosenti ... Werth uses them as the backdrop to ask a more broadly relevant and philosophical question: not just how to build a large drug company, but what to grow up to become? …. Sometime, somewhere, a future biopharma CEO will hopefully read The Antidote and be inspired to continue the quest.”
— Pharmagellan.com