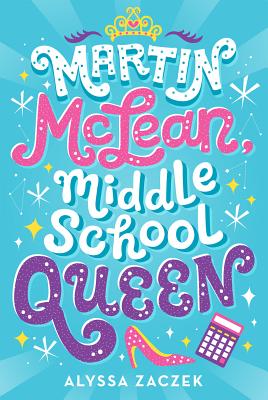 
On Our Shelves Now
In this bighearted middle-grade debut, Martin McLean struggles to find his voice--and his inner diva--as he navigates friendship, family, first crushes, and a whole lot of glitter. "An amusing story that's bursting with diversity at every turn. . . . A tasty treat."--Kirkus (Starred review) Seventh-grader Martin McLean has always been surrounded by people who can express themselves. His mother is an artist, his colorful T o Billy works in theater, and his best friends Carmen and Pickle are outgoing and don't care what other people think. But Martin can only find the right words when he's answering a problem at a Mathletes competition--until his t o introduces him to the world of drag. In a swirl of sequins and stilettos, Martin creates his fabulous drag queen alter ego, Lottie Le n. As Lottie, he is braver than he's ever been; but as Martin, he doesn't have the guts to tell anyone outside of his family about her. Not Carmen and Pickle, not his Mathletes teammates, and definitely not Chris, an eighth-grader who gives Martin butterflies. When Martin discovers that his first-ever drag show is the same night as the most important Mathletes tournament, he realizes that he can only pull off both appearances by revealing his true self to his friends--and channeling his inner drag superstar. "Amazing, fierce, and very inspirational . . . this book will inspire kids to express themselves." --Desmond is Amazing "Never, in a million years, did I ever expect to read a story about an actual drag kid It was amazing and inspiring and perfect for kids like me " --Nemis Quinn M lan on Golden, aka Lactatia "A beautiful story of coming of age and self-realization . . . I love this book." --E the Dragnificent

Alyssa Zaczek is an author, playwright, journalist, and a lifelong lover of words. Martin McLean, Middle School Queen is her debut novel. Originally from Chicago, Alyssa now lives in St. Cloud, MN. Visit her online at alyssazaczek.com and on Twitter @AlyssaDZaczek.