Siege of Budapest 1944–45: The Brutal Battle for the Pearl of the Danube (Campaign) (Paperback) 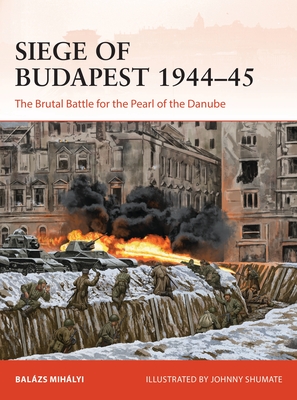 Siege of Budapest 1944–45: The Brutal Battle for the Pearl of the Danube (Campaign) (Paperback)

A gripping and detailed study of the brutal urban battle for Budapest, which saw German and Hungarian troops struggling to halt the joint Soviet-Romanian offensive to take the key city on the Danube.

The 52-day-long siege of Budapest witnessed some of the most destructive urban fighting of the war. The Transdanubia region was strategically vital to Nazi Germany for its raw materials and industry, and because of the bridgehead it allowed into Austria. As a result, Hitler declared Budapest a fortress city in early December 1944. The battle for the city pitted 90,000 German and Hungarian troops against 170,000 Soviet (2nd and 3rd Ukrainian Fronts) and Romanian attackers. The operations to take the city ran across several phases, from the initial Soviet approach to Budapest commencing in late October 1944, through the encirclement of city first on the Pest side of the Danube, and then on the Buda bank, and on to the savage urban fighting that began in December 1944 for the Hungarian capital. This superbly detailed work analyses the background, chronology and consequences of the siege from both a military and political perspective, and documents the huge losses in military and civilian casualties and material damage.

Balázs Mihályi has a PhD in Cartography, specializing in military historical mapping. He has a long-standing interest in the siege of Budapest, and has explored many different aspects of the events in magazine articles, books, academic papers and conferences. He has also contributed a large body of maps relating to the siege of Budapest to Hungarian language publications forever 15 years. Balázs lives in Budapest, Hungary, where he currently works for a management and IT consultancy.

Johnny Shumate works as a freelance illustrator living in Nashville, Tennessee. He began his career in 1987 after graduating from Austin Peay State University. Most of his work is rendered in Adobe Photoshop using a Cintiq monitor. His greatest influences are Angus McBride, Don Troiani, and Édouard Detaille.