Fire and Ice: The Volcanoes of the Solar System (Hardcover) 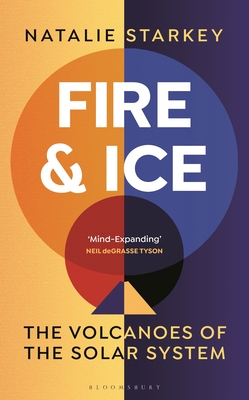 Fire and Ice: The Volcanoes of the Solar System (Hardcover)

The volcano – among the most familiar and perhaps the most terrifying of all geological phenomena. However, Earth isn't the only planet to harbor volcanoes. In fact, the Solar System, and probably the entire Universe, is littered with them. Our own Moon, which is now a dormant piece of rock, had lava flowing across its surface billions of years ago, while Mars can be credited with the largest volcano in the Solar System, Olympus Mons, which stands 25km high. While Mars's volcanoes are long dead, volcanic activity continues in almost every other corner of the Solar System, in the most unexpected of locations.

We tend to think of Earth volcanoes as erupting hot, molten lava and emitting huge, billowing clouds of incandescent ash. However, it isn't necessarily the same across the rest of the Solar System. For a start, some volcanoes aren't even particularly hot. Those on Pluto, for example, erupt an icy slush of substances such as water, methane, nitrogen or ammonia, that freeze to form ice mountains as hard as rock. While others, like the volcanoes on one of Jupiter's moons, Io, erupt the hottest lavas in the Solar System onto a surface covered in a frosty coating of sulphur.

Whether they are formed of fire or ice, volcanoes are of huge importance for scientists trying to picture the inner workings of a planet or moon. Volcanoes dredge up materials from the otherwise inaccessible depths and helpfully deliver them to the surface. The way in which they erupt, and the products they generate, can even help scientists ponder bigger questions on the possibility of life elsewhere in the Solar System.

Fire and Ice is an exploration of the Solar System's volcanoes, from the highest peaks of Mars to the intensely inhospitable surface of Venus and the red-hot summits of Io, to the coldest, seemingly dormant icy carapaces of Enceladus and Europa, an unusual look at how these cosmic features are made, and whether such active planetary systems might host life.

Natalie Starkey is a geologist, cosmochemist and science communicator. Natalie's doctorate at Edinburgh University on the geochemistry of Arctic volcanoes saw her travelling to the volcanic lava-fields of Iceland and the ancient volcanoes of northern Scotland, and she also spent time as a volcanologist on the island of Montserrat in the Caribbean. Later, Natalie's postdoctoral research expanded to include the analysis of rock samples from space, which led to her first popular science book, Catching Stardust (Bloomsbury Sigma, 2018). Her latest book is Fire and Ice, an exploration of the volcanoes of the solar system.

Natalie received a British Science Association Media Fellowship in 2013 to work with the Guardian. She has been a science host on Neil deGrasse Tyson's popular StarTalk Radio, and is now Science Media Producer for Chemistry World at The Royal Society of Chemistry.

"Fire and Ice is an assured, essential read on everything you could hope to know about volcanoes on both our world and others. It captures the intrigue, mystery and wonder of space, and underscores just how much we have to thank volcanoes for on Earth." - New Scientist

"Starkey’s excellent book is the first to examine these extra-terrestrial volcanoes of our Solar System … It’s an explosive read in more ways than one." - Forbes

“In Fire and Ice, geologist and solar system maven Natalie Starkey reveals to us that Earth is not the only host for active volcanoes. You can find them in places not previously imagined, like the surfaces of other planets and their moons. And you think you've seen everything? Some of these volcanoes even spew ice. Read all about it in this mind-expanding book.” —Neil deGrasse Tyson, Astrophysicist American Museum of Natural History

"[Starkey] masterfully weaves the latest information we have about volcanoes throughout the Solar System into a broader narrative about planets and moons themselves. The result is a book about volcanoes — and so much more ... entertaining and informative." - Nature

“A FANTASTIC exploration of the hidden workings of the planets, and a timely reminder of what a fascinating and dramatic place our solar system is.” —Dallas Campbell, Science television presenter and author

“Fire and Ice explores a unique blend of space volcanoes – from the inner workings to the outer landscapes. Natalie journeys into the weird nature of volcanism and dives into current outstanding questions that we are still exploring.” —Dr Caitlin Ahrens, NASA / USRA

“Natalie Starkey leads us on an incredible journey across our solar system, revealing a wonderful variety of volcanic geology. A fascinating look at volcanoes and the space science that enables us to study them.” —Rebecca Williams, Volcanologist

“[Starkey] masterfully weaves the latest information we have about volcanoes throughout the Solar System into a broader narrative about planets and moons themselves. The result is a book about volcanoes — and so much more ... entertaining and informative." - Nature