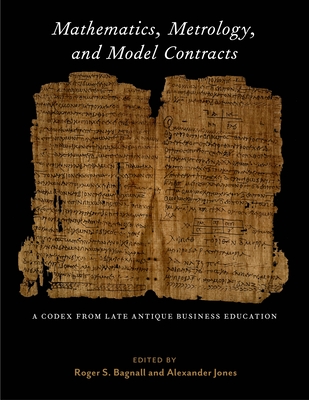 A comprehensive edition and commentary of a late antique codex

Mathematics, Metrology, and Model Contracts is a comprehensive edition and commentary of a late antique codex. The codex contains mathematical problems, metrological tables, and model contracts. Given the nature of the contents, the format, and quality of the Greek, the editors conclude that the codex most likely belonged to a student in a school devoted to training business agents and similar professionals. The editors present here the first full scholarly edition of the text, with complete discussions of the provenance, codicology, and philology of the surviving manuscript. They also provide extensive notes and illustrations for the mathematical problems and model contracts, as well as historical commentary on what this text reveals about late antique numeracy, literacy, education, and vocational training in what we would now see as business, law, and administration. The book will be of interest to papyrologists and scholars who are interested in the history and culture of late antiquity, the history of education, literacy, the ancient economy, and the history of science and mathematics.
Roger S. Bagnall (Editor) Roger S. Bagnall is Leon Levy Director and Professor of Ancient History Emeritus at the Institute for the Study of the Ancient World at New York University. He is author, co-author, and editor of many books including Egypt in Late Antiquity and Everyday Writing in the Graeco-Roman East. Alexander Jones (Editor) Alexander Jones is Leon Levy Director and Professor of the History of the Exact Sciences in Antiquity at the Institute for the Study of the Ancient World. His work centers on texts and artifacts relating to Greco-Roman mathematical sciences, their intellectual and social context, and their interconnections with scientific traditions in other cultures and periods.