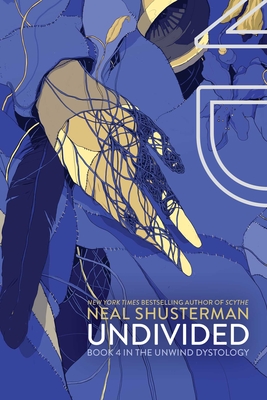 This is book number 4 in the Unwind Dystology series.

The fate of America hangs in the balance in the fourth and final book in the New York Times bestselling Unwind Dystology series by Neal Shusterman.

Cam was only the start of Proactive Citizenry’s plans for rewound teens. The corrupt company is planning to mass-produce rewound teen soldiers, and to keep their profitable plans from being interrupted, they’ve been suppressing technology that could make unwinding completely unnecessary.

When Conner, Risa, and Lev uncover these startling secrets, enraged teens march on Washington to demand justice and a better future. But more trouble is brewing. Starkey’s group of storked teens is growing more powerful and militant with each new recruit. And if they have their way, they’ll burn the harvest camps to the ground and put every adult in them before a firing squad.

Can the persecuted teens get the justice they deserve without dooming America to a divided and violent future?
Neal Shusterman is the New York Times bestselling author of more than thirty award-winning books for children, teens, and adults, including the Unwind dystology, the Skinjacker trilogy, Downsiders, and Challenger Deep, which won the National Book Award. Scythe, the first book in his latest series, Arc of a Scythe, is a Michael L. Printz Honor Book. He also writes screenplays for motion pictures and television shows. Neal is the father of four, all of whom are talented writers and artists themselves. Visit Neal at StoryMan.com and Facebook.com/NealShusterman.
"Shusterman's finale might be the best one in the series since the first...Everything culminates in an action-packed, heart-wrenching conclusion guaranteed to chill readers to the bone."
— Kirkus Reviews

"The battle for hearts and minds--and teenage body parts--winds to a dramatic close in the finale to Shusterman's darkly satiric UnWind Dystology...true page-turner like the previous books."
— Booklist

"[A] lot of thought-provoking topics for discussion. The story is intriguing: a wonderful end to a unique and noteworthy series."
— School Library Journal

*"The popularity of this series is warranted: it is smart, it is dark, it is riveting, and the characters are drawn with respect. Furthermore, Shusterman’s series transcends the dystopian fan base. Libraries without books one through three should get them. Those who already have them, start the waiting list now."
— VOYA, starred review