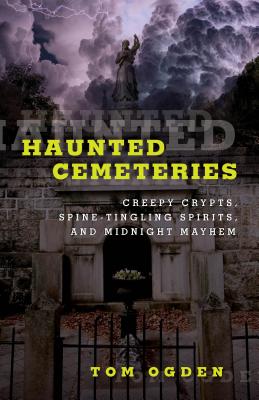 
On Our Shelves Now
Everybody knows better. Yet from the days of ancient Greece, people have hurried their steps as they passed by--or, heaven forbid, walked through--a cemetery after dark. Indeed, over the centuries there have been countless stories of ghost encounters at churchyards, secular cemeteries, ancient burial grounds, and isolated graves. The second edition of Haunted Cemeteries exhumes more than 200 haunted happenings from restless graveyard ghosts in cemeteries across each of the fifty states and Washington, DC, including: -Nevermore : At least four entities, including the spectre of Edgar Allan Poe, haunt Westminster Burying Ground in Baltimore. And just who is the mysterious Man in Black that shows up every year on January 19, the writer's birthday?. -The Resurrection Apparition: A "hitchhiking ghost" outside Justice, Illinois, vanishes from the car she's riding in as it passes Resurrection Cemetery--earning her the nickname Resurrection Mary. -The Queen of Voodoo: The restless spirit of Marie Laveau, the nineteenth-century Queen of Voodoo, is said to appear in New Orleans's St. Louis Cemetery No. 1 in the form of a gigantic black crow or a phantom black hellhound--when she's not walking through the French Quarter.
Tom Ogden has never seen a ghost. But as a magician for forty years, he has a natural interest in ghosts, hauntings, and all things supernatural. He's the author of seventeen books, and this edition of Haunted Cemeteries is his eleventh book for the Globe Pequot "Haunted" series. Ogden is in demand as a speaker on the Spirit World and is a member of the Paranormal Investigation Committee of the Society of American Magicians.