The Book of Viking Myths: From the Voyages of Leif Erikson to the Deeds of Odin, the Storied History and Folklore of the Vikings (Hardcover) 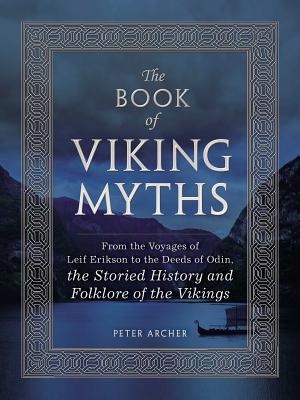 The Book of Viking Myths: From the Voyages of Leif Erikson to the Deeds of Odin, the Storied History and Folklore of the Vikings (Hardcover)


Backordered
This fascinating new book reveals the origins of the Vikings—from Thor and Leif Erikson to Loki and the Valkyries—and the tales that have influenced our own lives.

For thousands of years, Vikings have held a storied place in our culture—their distinct appearance, their mighty longships, their reputation for causing death and destruction. But who were these strange and mysterious folk?

The Book of Viking Myths retells the stories of the Viking people, with myths of their gods and goddesses, monsters, and great heroes. From tales of the beautiful and powerful Freyja, to the gold-toothed Heimdallr, to the wolf Fenrir, Peter Archer explores all the figures and tales that make up Norse mythology.

Along with these legends of seafaring, dwarves, giants, and the exploits of Thor, you will also discover the influences that Viking culture has had on our own lives. It’s a true exploration of Nordic culture—and a glimpse into the history and lore of these fabled Nordic warriors.
Peter Archer has taught college classes in classical mythology, the legends of King Arthur, and American folklore. He is the author or coauthor of sixteen books and has held jobs ranging from a pit clerk at the Chicago Mercantile Exchange to production editor on a left-wing newspaper in New York City. He is currently an editor at Adams Media and lives in a 200-year-old converted parsonage in southeastern Massachusetts with two cats and about 4,000 books.