Confessions of the Flesh: The History of Sexuality, Volume 4 (Hardcover) 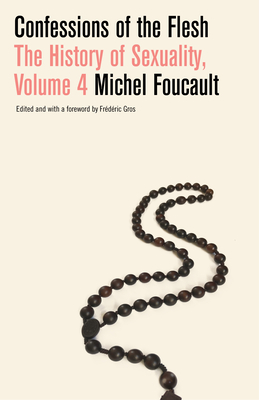 Confessions of the Flesh: The History of Sexuality, Volume 4 (Hardcover)


Usually Ships in 1-5 Days
The fourth and final volume in Michel Foucault’s acclaimed History of Sexuality, completed just before his death in 1984 and finally available to the public

One of the most influential thinkers of the twentieth century, Michel Foucault made an indelible impact on Western thought. The first three volumes in his History of Sexuality—which trace cultural and intellectual notions of sexuality, arguing that it has been profoundly shaped by the power structures applied to it—constitute some of Foucault’s most important work. This fourth volume posits that the origins of totalitarian self-surveillance began with the Christian practice of confession. The manuscript had long been secreted away, in accordance with Foucault’s stated wish that there be no posthumous publication of his unpublished work.

With the sale of the Foucault archives in 2013, Foucault’s nephew felt that the time had come to publish this final volume in Foucault’s seminal history. Philosophically, it is a chapter in his hermeneutics of the desiring subject. Historically, it focuses on the remodeling of subjectivity carried out by the early Christian Fathers, who set out to transform the classical Logos of truthful human discourse into a theologos—the divine Word of a pure sovereign.

What did God will in the matter of righteous sexual practice? Foucault parses out the logic of the various responses proffered by theologians over the centuries, culminating with Saint Augustine’s fascinating discussion of the libido. Sweeping and deeply personal, Confessions of the Flesh is a tour de force from a philosophical master
One of the leading philosophical thinkers of the twentieth century, MICHEL FOUCAULT was born in Poitiers, France, in 1926. He lectured in universities throughout the world; served as director at the Institut Français in Hamburg, Germany, and at the Institut de Philosophie at the Faculté des Lettres and the University of Clermont-Ferrand, France; and wrote frequently for French newspapers and periodicals. His influence on generations of thinkers in the areas of sociology, queer theory, cultural studies, and critical thinking was profound. Among his many books are The Archaeology of Knowledge, The Birth of the Clinic, Confessions of the Flesh, Discipline and Punish, The Foucault Reader, Madness and Civilization, The Order of Things, and Power/Knowledge. At the time of his death in 1984, Foucault held a chair at the Collège de France, one of France’s most prestigious institutions.

FRÉDÉRIC GROS (editor) is a professor of philosophy at the University of Paris XII and the Institute of Political Studies, Paris. He was the editor of Foucault’s last published collection of lectures at the Collège de France. He has written books on psychiatry, law, and war, as well as the international best seller A Philosophy of Walking. He lives in Paris.
“A brilliant, challenging contribution to the history of ideas.”
— Kirkus Reviews (*starred*)

“Michel Foucault is a thinker from whose writing one can infer lessons for our modern lives and dilemmas.”
—The Boston Globe

“This is required reading for those who cling to stereotyped ideas about our difference from the Greeks in terms of pagan license versus Christian austerity, or their hedonism versus our anxiety.”
—Los Angeles Times Book Review