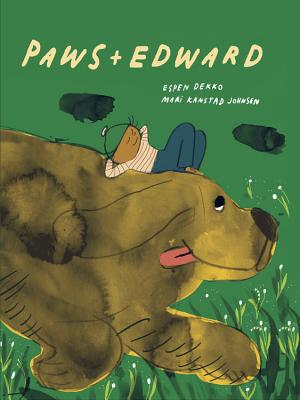 
On Our Shelves Now
Paws is tired. He just wants to rest. And to dream about the days when he used to chase rabbits. He still walks with Edward to the park twice a day, but only because Edward needs the fresh air. Until one day, Paws decides he doesn't want to go for another walk. He just wants to lie in Edward's bed. “Paws has walked and walked. His paws are heavy. Paws doesn't have to walk anymore. Paws doesn't have to do anything anymore.” And Paws falls asleep one last time, leaving Edward to dream of the days when Paws used to chase rabbits.Espen Dekko's gently heartbreaking and heart-lifting story hits the perfect note as it explores death in an accessible, child-friendly, and nonfrightening way. By writing from the dog's perspective, Dekko makes it easier for children to understand and accept Paws's decline and death. Beginning with Paws dreaming of chasing rabbits and ending with Edward dreaming of Paws chasing rabbits, the story has a circular structure that is satisfying and reassuring, as it conveys the boy's acceptance of the loss of his beloved pet. Richly colored illustrations by Mari Kanstad Johnsen have a simultaneously retro and contemporary feel, perfectly highlighting the joy and love at the heart of this boy-dog relationship. This book is an excellent choice for any children --- or adults --- dealing with or talking about loss, or for lessons about the life cycle of living things.
Espen Dekko has worked as a puppeteer and instructor and has directed a number of theatrical performances. Espen also studied at the Norwegian Institute for Children's Books and is the author of several children's books. He lives in Norway.

Mari Kanstad Johnsen is an illustrator and artist. She is also the author of a number of children's books, which have been translated into French, Spanish and Swedish. Mari has been selected among other new literary talents for Norway's ?New Voices? program at the 2019 Frankfurt Book Fair. She lives in Norway.

A truly brilliant contribution to the genre and a must for any child who has lost a beloved pet.—Kirkus Reviews, starred review

... highly recommended for anyone who has an elderly pet or had a pet that recently passed away.—CM Magazine