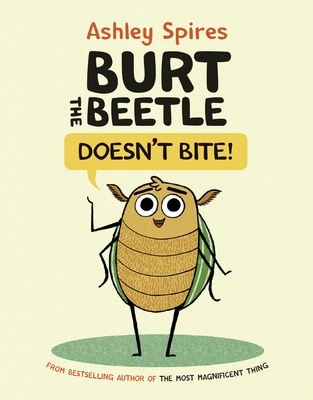 
Usually Ships in 1-5 Days
Ashley Spires brings her signature deadpan humor to this hilarious story about one bug's quest for greatness (with some cool insect facts mixed in!).Meet Burt, a ten-lined june beetle. He's sure he belongs in the category of bugs with superpower-like abilities. No, he can't carry 50 times his weight, like ants. No, he's not able to spray paralyzing venom, like some termites. No, he can't release a bad smell to repel predators, like stink bugs. What june beetles are known for is chasing porch lights and flailing their legs in the air --- does that count? Hmm ... Maybe Burt will just have to accept the truth. June beetles don't have any special abilities. But when some other bugs find themselves in perilous trouble that even their superpowers can't get them out of, Burt suddenly realizes there is one thing that he can do to save his friends --- and it's something that only a june beetle can do!Bestselling author-illustrator Ashley Spires's signature mix of slapstick and dry humor is front and center in this winning story that highlights how being special is as much about character as it is about abilities. Full of simply drawn panels prominently featuring the ever-plucky Burt, it's a perfect pick for emerging readers and young fans of comics. Burt's positive attitude toward himself and others offers many opportunities for character education lessons on caring, positive thinking and initiative. Snuck into the pages are facts about bugs and their traits, making this a fun choice for a science unit on the characteristics of living things.
Ashley Spires grew up in the Pacific Northwest, the supposed stomping grounds of Bigfoot. She is the author and illustrator of a number of books for children, including Small Saul and the Adventures of Binky the Space Cat. She was the recipient of the 2011 Silver Birch Express Award and the 2011 Hackmatack Award for Binky the Space Cat and was shortlisted for a Joe Shuster Comics for Kids Award and an Eisner Award for Binky Under Pressure. Ashley currently lives in British Columbia.
Beginning readers are in for a treat with this silly offering, which immediately brings to mind Elise Gravel's Disgusting Critters series.—Booklist

As with Doreen Cronin's “Diary” books and Elise Gravel's “Disgusting Critters” series, most young readers will have no trouble digesting the facts while also enjoying the humor and the story.—School Library Journal

[A] playful but informative gander at the natural world.—Kirkus Reviews

This adorable story of finding one's gifts and accepting them for what makes one special is a winner, one with a indefatigably cheerful and likeable protagonist.—CM Magazine