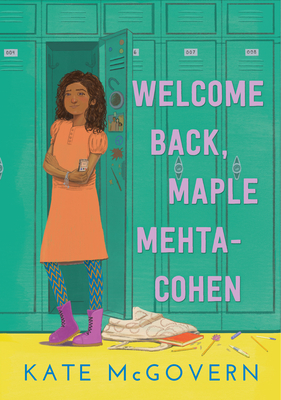 
On Our Shelves Now
Maple is in fifth grade—again. Now everyone will find out she struggles with reading—or will they? An engaging read for anyone who has ever felt different.

Maple Mehta-Cohen has been keeping a secret: she can’t read all that well. She has an impressive vocabulary and loves dictating stories into her recorder—especially the adventures of a daring sleuth who’s half Indian and half Jewish like Maple herself—but words on the page just don’t seem to make sense to her. Despite all Maple’s clever tricks to hide her troubles with reading, her teacher is on to her, and now Maple has to repeat fifth grade. Maple is devastated—what will her friends think? Will they forget about her? She uses her storytelling skills to convince her classmates that she's staying back as a special teacher’s assistant (because of budget cuts, you know). But as Maple navigates the loss of old friendships, the possibility of new ones, and facing her reading challenges head-on, her deception becomes harder to keep up. Can Maple begin to recognize her own strengths, and to love herself—and her brain—just the way she is? Readers who have faced their own trials with school and friendships will enjoy this heartwarming story and its bright, creative heroine.
Kate McGovern is the author of the young adult novels Rules for 50/50 Chances and Fear of Missing Out, which received starred reviews. She has worked in schools and education nonprofits in Boston, London, and New York City, including at the Harlem Children's Zone, where she served as a reading specialist and directed Shakespeare productions with middle-schoolers. Her daughter, Priya, is the original "Hin-Jew" kid that Maple is written for. Kate McGovern lives in an Indian-Jewish household in Cambridge, Massachusetts.
Poignant. . . For young people who struggle with reading or feeling different because of other academic issues, Maple is a welcome protagonist.
—School Library Journal