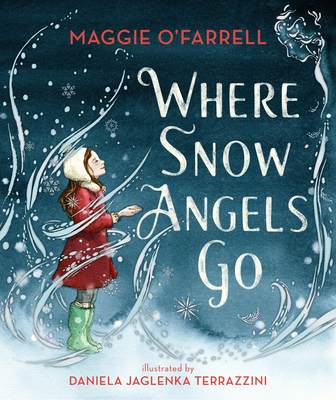 
On Our Shelves Now
What happens to a snow angel after you leave it behind? A little girl discovers she has an unusual protector in a modern fairy tale with gorgeously detailed illustrations.

One night Sylvie awakens to an incredible sight: a glowing figure tiptoeing across her floor, with enormous feathery wings wafting from his back. He’s muttering to himself, trying to remember his orders, for this is his first flight. Could he really be the same angel she made last winter in the snow? Sylvie’s angel says she isn’t supposed to see him. He has been sent to save her life, and when the danger is past, she won’t remember he was there. But she does remember. She thinks of him every day. And when nothing Sylvie does, no matter how risky, can make him reappear, she realizes he’ll always be there unseen when she truly needs him. In a contemporary tale told with humor and warmth, paired with Daniela Jaglenka Terrazzini’s enchanting artwork, Maggie O’Farrell weaves the story of a spirited girl who finds a way to bring magic into her own house—and enlist it to bring a sense of wonder to those she loves.
Maggie O'Farrell is an award-winning Irish-British author whose books for adults have received international acclaim, including Hamnet, which won the Fiction Prize at the 2020 National Book Critics Circle Awards. Where Snow Angels Go is her first book for children. She lives in Edinburgh.

Daniela Jaglenka Terrazzini studied fine art in Milan and moved to London to study photography. She is the illustrator of The Night I Met Father Christmas by Ben Miller and The Seeing Stick by Jane Yolen, among other picture books. She lives in London.
O’Farrell’s touching, slightly eerie story is rendered beautifully by Daniela Jaglenka Terrazzini. . . . Since its artwork is paired so well with the poetry of the words, ‘Where Snow Angels Go’ has the feel of a timeless bedtime story.
—The New York Times Book Review

Using line, color washes, and arresting perspectives, the illustrations in this lengthy picture book deftly convey the realism of Sylvie’s world, the wonder of her snow angel, and the sweetness of their bond in scenes of drama as well as stillness. . . . An appealing contemporary fairy tale told with humor and warmth.
—Kirkus Reviews

Graceful ink and watercolor spreads by Terrazzini (The Seeing Stick) give pre-Raphaelite romance to the tall angel and to Sylvie’s soulful eyes and honey-colored hair. O’Farrell’s lengthy, storybook-style narration and winning dialogue (“I really had no idea that you would be so talkative,” the angel sighs) similarly give life to this witty exploration of godlike power and what it’s good for.
—Publishers Weekly