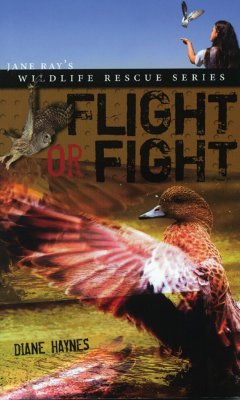 An adventure-packed debut for an exciting new fiction series.

When shy, quiet Jane Ray rescues a drowning seabird from an oil spill in Vancouver's Burrard Inlet, she finds herself face to face with national television cameras -- and head to head with the alleged culprit, SeaKing Shipping Pacific.

In Flight or Fight, the first book in Whitecap's newest action-packed series, Jane discovers that there comes a time when everyone has to choose between running and taking a stand. Impassioned by the dedication of animal rescue crews working around the clock to save hundreds of oiled birds, Jane volunteers with the Urban Wildlife Rescue Center and begins a campaign urging SeaKing to take responsibility for the spill. Jane grows frustrated by the lack of response, but far from ignoring her, SeaKing executives are growing worried about the vocal young girl. Will they resort to drastic measures to keep her quiet? Jane is going to need all the help she can get from her two best friends... and a couple of surprising allies as well.

About the Wildlife Rescue Series When you carve a city out of a rainforest, you can be sure the animals are going to need somebody on their side. In Wildlife Rescue, reluctant heroine Jane Ray is that somebody. An exciting new series that explores the challenges and rewards of wildlife rescue and rehabilitation, Wildlife Rescue is packed with fascinating facts and interactive resources including volunteer opportunities and animal rescue how-to's. Wildlife Rescue is sure to delight animal lovers everywhere.

Author and animal welfare activist Diane Haynes began volunteering at the Wildlife Rescue Association of B.C. after a canola oil spill in Burrard Inlet. First published at the age of eight, she worked as a shoe salesperson, ice cream scooper, receptionist, marketing director, and technical editor before realizing she'd had it all figured out in grade three. She's been a freelance feature writer for 15 years, and was recently nominated for a National Magazine Award.