A More Perfect Union: What We the People Can Do to Reclaim Our Constitutional Liberties (Hardcover) 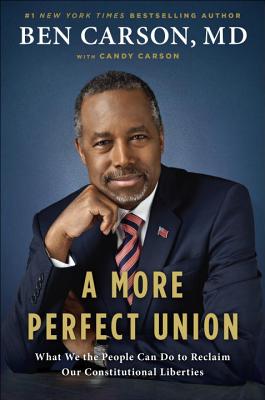 A More Perfect Union: What We the People Can Do to Reclaim Our Constitutional Liberties (Hardcover)


On Our Shelves Now
Dear Reader,

Many people have wondered why I’ve been speaking out on controversial issues for the last few years. They say I’ve never held political office. I’m not a constitutional scholar. I’m not even a lawyer. All I can say to that is “Guilty as charged.”

It’s true that I’ve never voted for a budget America could not afford. I’ve never raised anyone’s taxes. And I’ve never promised a lobbyist anything in exchange for a donation.

Luckily, none of that really matters. Our founding fathers didn’t want a permanent governing class of professional politicians. They wanted a republic, in Lincoln’s words, "of the people, by the people, and for the people." A country where any farmer, small-business owner, manual laborer, or doctor could speak up and make a difference.

I believe that making a difference starts with understanding our amazing founding document, the U.S. Constitution. And as someone who has performed brain surgery thousands of times, I can assure you that the Constitution isn’t brain surgery.

The founders wrote it for ordinary men and women, in clear, precise, simple language. They intentionally made it short enough to read in a single sitting and to carry in your pocket.

I wrote this book to encourage every citizen to read and think about the Constitution, and to help defend it from those who misinterpret and undermine it. In our age of political correctness it’s especially important to defend the Bill of Rights, which guarantees our freedom to speak, bear arms, practice our religion, and much more.

The Constitution isn’t history—it’s about your life in America today. And defending it is about what kind of country our children and grandchildren will inherit.

I hope you’ll enjoy learning about the fascinating ways that the founders established the greatest democracy in history—and the ways that recent presidents, congresses, and courts have threatened that democracy.

As the Preamble says, the purpose of the Constitution is to create a more perfect union. My goal is to empower you to help protect that union and secure the blessings of liberty.

Sincerely,
Ben Carson
BEN CARSON, MD, was raised by a poor single mother in Detroit. He retired as the director of pediatric neurosurgery at Johns Hopkins Hospital after a groundbreaking medical career of more than thirty-five years. He is the author of eight previous books, including One Nation, One Vote, America the Beautiful, and Gifted Hands. A former member of the President’s Council on Bioethics, he is the recipient of the Presidential Medal of Freedom, the highest civilian honor in the country.

Dr. Carson and his wife and coauthor, CANDY CARSON, are the founders of the Carson Scholars Fund, which recognizes the achievements of deserving young people. They have three grown children and two grandchildren, and now live in Florida.