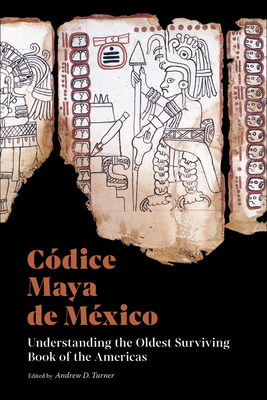 An in-depth exploration of the history, authentication, and modern relevance of Códice Maya de México, the oldest surviving book of the Americas.

Ancient Maya scribes recorded prophecies and astronomical observations on the pages of painted books. Although most were lost to decay or destruction, three pre-Hispanic Maya codices were known to have survived, when, in the 1960s, a fourth book that differed from the others appeared in Mexico under mysterious circumstances. After fifty years of debate over its authenticity, recent investigations using cutting-edge scientific and art historical analyses determined that Códice Maya de México (formerly known as Grolier Codex) is in fact the oldest surviving book of the Americas, predating all others by at least two hundred years.

This volume provides a multifaceted introduction to the creation, discovery, interpretation, and scientific authentication of Códice Maya de México. In addition, a full-color facsimile and a page-by-page guide to the iconography make the codex accessible to a wide audience. Additional topics include the uses and importance of sacred books in Mesoamerica, the role of astronomy in ancient Maya societies, and the codex's continued relevance to contemporary Maya communities.

This volume is published to accompany an exhibition on view at the J. Paul Getty Museum at the Getty Center from October 18, 2022, to January 15, 2023.
Andrew D. Turner is a senior research specialist at the Getty Research Institute. Trained as an archaeologist and art historian, Turner’s work focuses on ancient Mesoamerican material culture, religion, and symbolism. He has held positions at Yale University and the University of Cambridge; at Getty he is the project lead for the Pre-Hispanic Art Provenance Initiative, which traces the movement of looted pre-Hispanic art through the international art market.

“Códice Maya de México promises ‘understanding’ in its title and delivers to the highest degree, with all the lucidity and scholarship to be expected from the Getty Research Institute.  After decades of see-sawing disputes—some favoring the authenticity of this document, others not— Andrew Turner and his colleagues have landed at where we should have been at the start, when the book first came to our attention in the 1960s. Arising in a time of cultural interplay, Códice Maya de México shows itself to be the earliest, largely complete tome from Indigenous America. Looking to the heavens, and to Venus in particular, this screenfold (or leporello) indicates how predictable planetary movements were linked in Maya minds to cyclic conflicts between gods. And it does so by muting language and highlighting lists of days unencumbered by more elaborate text. Códice Maya thus served as a supple hybrid. Crosscutting societies, it ‘lived’ between different languages and rituals yet still retained its Maya identity. Códice Maya, a special treasure of the Estados Unidos Mexicanos, has now fulfilled its own manifest destiny by traveling to Los Angeles, a city founded by the precursor of the Mexican republic and a global example today of the benefits of cultural contact. This study and the welcome visit of the codex to the J. Paul Getty Museum provide unrivaled pleasures to all who care about the power of books and what happens when societies collide, mesh, and—as a direct result—strengthen.”
—Stephen Houston, editor of A Maya Universe In Stone

“What a great story: a rare Mesoamerican document, once thought to be a fake and featuring nuanced innovations in the arrangement of its complex astronomical content from a long-regarded archetype, is confirmed half a century later to be the archetype’s historical predecessor. You can't make this stuff up. In this tidy, accessible package, Andrew Turner brings together the story of the physical analysis, historical background, and decipherment of Códice Maya de México—the oldest book in the world of the Maya.”
—Anthony Aveni, Russell Colgate Distinguished University Professor of Astronomy, Anthropology, and Native American Studies Emeritus at Colgate University

“These interconnected essays explore astronomical knowledge, bookmaking practices, artistic and scribal conventions, and belief systems at a significant juncture in Mesoamerican history through analysis of the recently authenticated Códice Maya de México. What I found especially compelling were the complementary methodologies and perspectives employed to contextualize this early codex, framing it not only within the cultural context of its eleventh- or twelfth-century creators but also in terms of its significance to contemporary descendant populations working to reclaim their intellectual heritage.”

“Códice Maya de México: Understanding the Oldest Surviving Book of the Americas is a welcome synthesis of past and recent studies of this important but controversial pre-Hispanic book. Combining historical, iconographic, and scientific research, as well as the Indigenous perspective on ancient Maya writing and beliefs, the authors convincingly demonstrate the authenticity of the manuscript. An annotated, full-color reproduction of the codex is included.”
—Virginia E. Miller, Associate Professor Emerita of Pre-Columbian and Native American Art, University of Illinois, Chicago

One of The New York Times Best Art Books of 2022

“Reads like an adventure story. . . . The Códice Maya de México, an illustrated book in the form of a paper scroll painted by an unknown Mayan artist around 1100 A.D., remains mysterious in its precise meanings, celestial and earthly. Historians writing in the Getty catalog offer fascinating theories on both. And thanks to a foldout insert, we get to peruse the Codex itself, which is as visually inventive as any graphic novel you’ll ever see.”
— Holland Cotter