When You Find My Body: The Disappearance of Geraldine Largay on the Appalachian Trail (Hardcover) 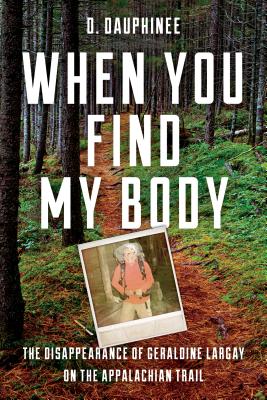 When You Find My Body: The Disappearance of Geraldine Largay on the Appalachian Trail (Hardcover)


On Our Shelves Now
When Geraldine "Gerry" Largay (AT trail name, Inchworm) first went missing on the Appalachian Trail in remote western Maine in 2013, the people of Maine were wrought with concern. When she was not found, the family, the wardens, and the Navy personnel who searched for her were devastated. The Maine Warden Service continued to follow leads for more than a year. They never completely gave up the search. Two years after her disappearance, her bones and scattered possessions were found by chance by two surveyors. She was on the U.S. Navy's SERE (Survival, Evasion, Resistance, and Escape) School land, about 2,100 feet from the Appalachian Trail. This book tells the story of events preceding Geraldine Largay's vanishing in July 2013, while hiking the Appalachian Trail in Maine, what caused her to go astray, and the massive search and rescue operation that followed. Her disappearance sparked the largest lost-person search in Maine history, which culminated in her being presumed dead. She was never again seen alive. The author was one of the hundreds of volunteers who searched for her. Gerry's story is one of heartbreak, most assuredly, but is also one of perseverance, determination, and faith. For her family and the searchers, especially the Maine Warden Service, it is also a story of grave sorrow. Marrying the joys and hardship of life in the outdoors, as well as exploring the search & rescue community, When You Find My Body examines dying with grace and dignity. There are lessons in the story, both large and small. Lessons that may well save lives in the future.
D. Dauphinee has been a mountaineering, fly fishing, and back-country guide for over thirty years and has participated with several search & rescue organizations. He has led many expeditions, including mountain, jungle, or desert treks on four continents. Twice he orienteered (without the benefit of a GPS) across the Isthmus of Panama, he has four first-ascents on mountains, has hiked the Negev Desert at its widest part, and has climbed above 20,000 feet thirteen times. A former UPI photographer, he is now a full-time writer and has published books on fly-fishing and travel. He has also written numerous essays and articles about fly fishing, climbing, and life for many newspapers and magazines. He lives in Bradley, Maine.