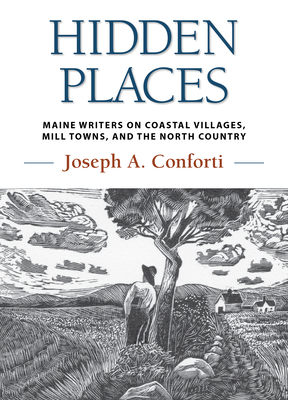 By Joseph a. Conforti


On Our Shelves Now
Across decades, Maine has produced nationally-recognized novelists of place-based fiction. From the late nineteenth century to the present, writers have explored the experiences of living in far-flung settings: island and coastal villages; northwoods lumbering communities; unincorporated townships; backcountry hamlets; and mill cities and towns. Taken together their body of work composes a remarkable literary map of a diverse and changing Maine. Hidden Places explores the identity of Maine through its writers and the people and places they captured at moments in time. Hidden Places traces the work of these writers to provoke readers into seeing and understanding Maine places with new awareness. These Maine writers construe place as both a territory on the ground and a country of the imagination. They help insiders see more clearly what is distinctive about their communities and encourage outsiders to better understand what might seem quaint or odd about the state. Like a well-drawn atlas, Hidden Places seeks to capture a diverse state at the granular level one representation at a time. It explores the identity of Maine through its writers and the people and places they wrote of.
Joseph Conforti is the author of seven previous books, including the award-winning Imagining New England. He also edited and contributed to Creating Portland: History and Place in Northern New England, which received an Award of Merit from the American Association for State and Local History. Conforti served for ten years as the founding director of the American and New England Studies Program at the University of Southern Maine.