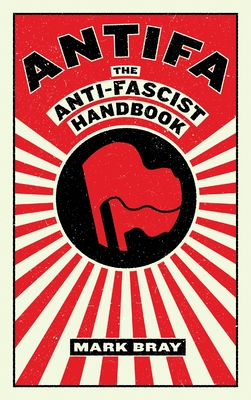 “Focused and persuasive... Bray’s book is many things: the first English-language transnational history of antifa, a how-to for would-be activists, and a record of advice from anti-Fascist organizers past and present.”—THE NEW YORKER

As long as there has been fascism, there has been anti-fascism — also known as “antifa.” Born out of resistance to Mussolini and Hitler, the antifa movement has suddenly burst into the headlines amidst opposition to the Trump administration and the alt-right.

In a smart and gripping investigation, historian and activist Mark Bray provides a detailed survey of the full history of anti-fascism from its origins to the present day — the first transnational history of postwar anti-fascism in English. Today, critics say shutting down political adversaries is anti-democratic; antifa adherents argue that the horrors of fascism must never be allowed the slightest chance to triumph again. Bray amply demonstrates that antifa simply aims to deny fascists the opportunity to promote their oppressive politics, and to protect tolerant communities from acts of violence promulgated by fascists.

Based on interviews with anti-fascists from around the world, Antifa details the tactics of the movement and the philosophy behind it, offering insight into the growing but little-understood resistance fighting back against fascism in all its guises.
MARK BRAY is a historian of human rights, terrorism, and political radicalism in Modern Europe who was one of the organizers of Occupy Wall Street. He is the author of Antifa: The Anti-Fascist Handbook, and Translating Anarchy: The Anarchism of Occupy Wall Street, and the co-editor of Anarchist Education and the Modern School: A Francisco Ferrer Reader. His work has appeared in the Washington Post, Foreign Policy, Salon, and numerous edited volumes. He currently teaches history at Rutgers University.
“Focused and persuasive... Bray’s book is many things: the first English-language transnational history of antifa, a how-to for would-be activists, and a record of advice from anti-Fascist organizers past and present.”—THE NEW YORKER

"Insurgent activist movements need spokesmen, intellectuals and apologists, and for the moment Mark Bray is filling in as all three... The book’s most enlightening contribution is on the history of anti-fascist efforts over the past century, but its most relevant for today is its justification for stifling speech and clobbering white supremacists."—Carlos Lozada, THE WASHINGTON POST

“[Bray’s] analysis is methodical, and clearly informed by both his historical training and 15 years of organizing, which included Occupy Wall Street…Antifa: The Anti-Fascist Handbook couldn’t have emerged at a more opportune time. Bray’s arguments are incisive and cohesive, and his consistent refusal to back down from principle makes the book a crucial intervention in our political moment.”—SAN FRANCISCO CHRONICLE

“Bray’s aim is to present an accessible genealogy of today’s militant anti-fascist movement… Antifa is written from a commendable place of engagement and provides a serviceable genealogy for militant anti-fascism in the present, and Bray’s often well-reasoned defense of controversial tactics should and will make the critics reflect. The book is at its best when criticizing the liberal view that official democratic institutions alone are sufficient to prevent a fascist seizure of power.” —LOS ANGELES REVIEW OF BOOKS

"Vital... [Bray] gives a straightforward and clear-headed evaluation of the movement. And there is an urgency here: Cranked out quickly post-Trump and released the week of the Charlottesville white supremacist attack, “Antifa Handbook” is hard history, a call to action, and an even-handed and reasonable explanation as to why we need to be way less damned reasonable."—THE BALTIMORE BEAT

“Mark Bray does a great job detailing the movement’s growth in the U.S. and giving historical context to the antifa’s resurgence. Read the book if you want to learn even more…” —REVEAL NEWS

“[An] excellent introduction, which serves as a reasoned and passionate defense…Antifa: The Anti-Fascist Handbook serves as an educational tool for those whose inclination is to support antifa because they oppose fascism and white supremacy, but remain on the fence... Bray’s concise and multilayered text is an essential aid in that task.” —COUNTER PUNCH

“Mark Bray’s Antifa: The Anti-Fascist Handbook arrives as a timely and thoroughly researched primer on the movement’s philosophy and tactics...readers of “Antifa” can be assured of gaining insight on an increasingly visible and misunderstood group looking to keep the genocidal past from repeating.” —PITTSBURGH POST-GAZETTE

“Antifa urges people to organize against fascism before it organizes against us.” —THE STRANGER