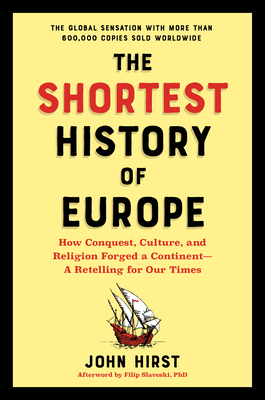 
Usually Ships in 1-5 Days
Uncover the decisive moments that shaped a world-changing continent. The Shortest History books deliver thousands of years of history in one riveting, fast-paced read.

Propelled by a thesis of startling simplicity, celebrated historian John Hirst’s fast-paced account of the making of modern Europe—from Ancient Greece to today—illuminates the continent as never before. Just three elements—German warrior culture, Greek and Roman learning, and Christianity—account for everything from the Crusades to the Industrial Revolution. Hirst’s razor-sharp grasp of cause and effect helps us see with sparkling clarity how the history of Europe—and the crucible of liberal democracy—shapes the way we live now.
John Hirst (1942–2016) was a celebrated historian and social commentator whose notable history books include Australian History in Seven Questions and The Australians. A history professor at La Trobe University for almost 40 years, he lived in Melbourne, Australia.
“Written in easily approachable style and resonating like the lectures of a beloved and provocative undergraduate history professor, this summary of European history holds broad appeal. . . . Simple, clever graphics clarify Hirst's theses and make them memorable.”—Booklist, starred review

“Beautifully and sparely constructed, yet rich in fact, feeling and detail, sweeping, challenging and funny.”—James Button, journalist and editor

“Great stuff, the book as a whole is constantly thought-provoking.”—Courier Mail

“Underwrite an overview of a complicated topic with one of these new short-and-sweet distillations. . . with maps, charts, sidebars, and illustrations to bring it alive.”—Mosaic, Morgan Stanley