The Remedy for Love: A Novel (Paperback) 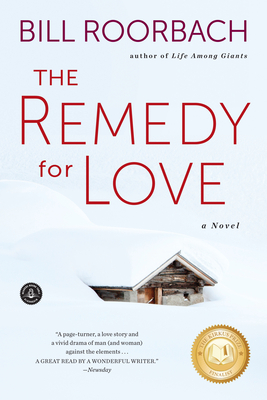 The Remedy for Love: A Novel (Paperback)


On Our Shelves Now
“A page-turner, a love story and a vivid drama of man (and woman) against the elements . . . A great read by a wonderful writer.” —Newsday

When the “Storm of the Century” threatens western Maine, Eric closes his office early and heads to the grocery store. In line ahead of him, an unkempt and seemingly unstable young woman comes up short on cash, so Eric offers her twenty bucks and a ride home. Trouble is, Danielle doesn’t really have a home. She’s squatting in a cabin deep in the woods: no electricity, no plumbing, no heat. Eric, with problems of his own, tries to walk away, but finds he can’t. Fending off her mistrust of him, he gets her set up with food, water, and firewood, and departs with relief. But when he climbs back to the road, his car is gone, and in desperation he returns to the cabin. As the storm intensifies, these two lost souls are forced to wait it out together.

Deeply moving, frequently funny, The Remedy for Love is a story about the secrets revealed when there is no time or space for anything but the truth.

“Brilliant . . . A tale that is as gripping as any Everest expedition--and that is also tender and terrifying and funny and, in the end, so true it seems inevitable.” —Peter Heller, author of The Dog Stars and The Painter

“Roorbach . . . is at the top of his literary game here. He is masterful in inviting readers along, allowing them to slowly get to know these two strangers as they get to know one another.” —Portland (Maine) Press Herald

“One of the best novels of this or any year . . . A flat-out funny, sexy, and poignant romantic thriller.” —David Abrams, author of Fobbit

Bill Roorbachis the author five previous books of fiction, including The Girl of the Lake, the Kirkus Prize finalist The Remedy for Love, the bestselling Life Among Giants, and the Flannery O’Connor Award–winning collection Big Bend. His memoir in nature,  Temple Stream , won the Maine Literary Award in nonfiction. Roorbach has received fellowships from the Civitella Ranieri Foundation and the National Endowment for the Arts. He held the William H. P. Jenks Chair in Contemporary American Letters at the College of the Holy Cross in Worcester, Massachusetts. His craft book, Writing Life Stories, has been in print for twenty-five years. His writing has appeared in Harper’s, the New York Times Magazine, the Atlantic, Ploughshares, Granta, Ecotone, New York magazine, and other publications. He lives in Maine with his family.

“A snowstorm hits a small town in Maine, trapping strangers in a cabin: Danielle, who is homeless, and Eric, a lawyer who swoops in to help her. As temps drop, tensions rise and passions flare.” —Good Housekeeping

“The Remedy for Love is a page-turner, a love story and a vivid drama of man (and woman) against the elements. Those who read and loved Roorbach's sprawling, eccentric Life Among Giants, coming to HBO as a dramatic series, will be a little surprised to see that The Remedy for Love is nothing like it--except that it's a great read by a wonderful writer who obviously has many tricks up his sleeve.” —Newsday

“Part survival tale and part romance . . . Roorbach does well in the limited space, keeping the narrative tight without being claustrophobic . . . There’s more depth to the fierce and mercurial Danielle than meets the eye, which gives [the characters'] interactions spark as the storm rages outside and something even more powerful develops within.” —Booklist

“One of the best novels of this or any year . . . A flat-out funny, sexy, and poignant romantic thriller.” —David Abrams, author of Fobbit

“The Remedy for Love is not the remedy for sleep deprivation. You’ll stay up all night . . . It is relentless and brilliant. Leave it to Roorbach to tease out the subtlest nuances in the progress of love while stoking a tale that is as gripping as any Everest expedition--and that is also tender and terrifying and funny and, in the end, so true it seems inevitable. I’m not sure there’s another American writing today who can lay down a love story, or any story, with the depth and appeal and freshness of Bill Roorbach.” —Peter Heller, author of The Dog Stars
— Review quotes