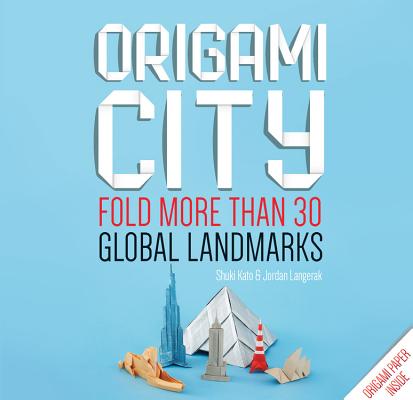 Origami City is an instructional guide to more than 30 landmarks from around the world. Starting in San Francisco with the Transamerica Pyramid, the book follows the international date line east through New York, London, Paris, and out to Tokyo and Sydney.

Each project features clear, illustrated steps, along with color photography of the paper landmarks in their real homes. Up front the book explains origami basics for complete beginners and some of the more unusual folds used for more experienced origamists.

The book comes complete with 20 sheets of colored origami paper, to get you started and ensure your first projects really look the part. Get folding!

Shuki Kato is an Origami artist based in Montana. In 2000, he became a member of OrigamiUSA and in college he lectured in small classes about origami design and taught simple origami models and folding techniques. He is the author of Origami Masters: Bugs, How the Bug Wars Changed the Art of Origami.

Jordan Langerak is a 19-year-old origami artist from Melbourne, Australia. He was first introduced to origami in grade 4 when his mom bought him a beginner origami book. However, it wasn't until the end of 2011 that he started to gain a real interest in complex origami. He has since designed and folded multiple works which he shares on Instagram (@langko) and Flickr. This is his first book as co-author and he plans to release his own in the future.

"Patterns include such iconic structures as The Washington Monument, The White House, The Empire State Building, Big Ben, The Burj Al Arab (that very cool hotel in Dubai that looks like the sail of a ship), and many more you will recognize instantly. They even show you how to make a leaning Tower of Pisa. It is absolutely amazing what you can make from folded paper!" - Rhapsody In Books blog