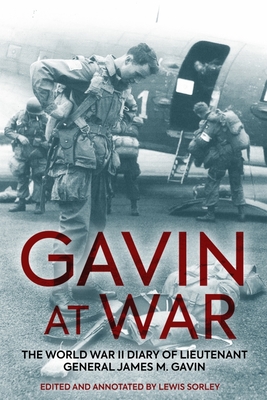 
Usually Ships in 1-5 Days
"Gavin at War provides a lively self-portrait. His diary is especially notable for its skeptical assessments of his comrades and his Army." -- The New York Times

"General Gavin was a very brave man who had great faith in his men. The battle or the weather never stopped him from going to check the troops. He would go in the rain or snow. If the battle was severe, he would crawl from foxhole to foxhole to talk to his men to let them know he was with them. Words cannot explain the love and pride I had for General Gavin."--Walter Woods, World War II aide to General Gavin

Lieutenant General James Gavin, commander of the 82nd Airborne Division during WWII, is one of the best-known figures of the war. Beginning as the commander of the 505th Parachute Combat Team that spearheaded the American assault on Sicily in July 1943, Gavin advanced to division command and finally command of US forces in Berlin. Throughout this time he kept a wartime diary that starts in April 1943, as the unit was preparing to go to northern Africa, and continues through to his final entry on 1 September 1945 during the occupation of Berlin.

During the war years, Gavin came into close contact with virtually all the leading airborne commanders and many others who would advance to the top levels of Army leadership. His diary includes observations on fellow military and political leaders such as General Dwight Eisenhower and the British Field Marshal Montgomery, army operations, and the general's personal life. Gavin was an officer who led by example: on four combat jumps--into Sicily, at Salerno, then Normandy and the Netherlands--he was the first man out the door. Two Distinguished Service Crosses, two Silver Stars, and the Purple Heart rewarded his service.

For decades, Gavin kept the existence of the journal a secret; the general's family discovered it among his belongings after his death. Editor Lewis "Bob" Sorley has worked closely with the Gavin family and the Army Heritage Center to prepare the diary for publication. His edited and annotated version includes a prologue and epilogue to frame the entries within the wider scope of the general's life.