William Blake vs. the World (Hardcover) 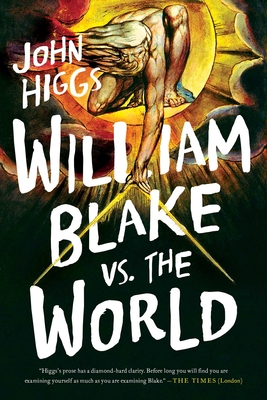 William Blake vs. the World (Hardcover)


Usually Ships in 1-5 Days
A wild and unexpected journey through culture, science, philosophy, and religion to better understand the mercurial genius of William Blake.

Poet, artist, and visionary, William Blake is an archetypal misunderstood genius. His life passed without recognition and he worked without reward, often mocked, dismissed and misinterpreted. Yet from his ignoble end in a pauper's grave, Blake now occupies a unique position as an artist who unites and attracts people from all corners of society—a rare inclusive symbol of human identity.

Blake famously experienced visions, and it is these that shaped his attitude toward politics, sex, religion, society, and art. Thanks to the work of neuroscientists and psychologists, we are now in a better position to understand what was happening inside that remarkable mind and gain a deeper appreciation of his brilliance. His timeless work, we will find, has never been more relevant.

In William Blake vs the World we return to a world of riots, revolutions, and radicals; discuss movements from the Levellers of the sixteenth century to the psychedelic counterculture of the 1960s; and explore the latest discoveries in neurobiology, quantum physics, and comparative religion.

Taking the reader on a wild adventure into unfamiliar territory, John Higgs places the bewildering eccentricities of a most singular artist into fascinating context. And although the journey begins with us trying to understand him, we will ultimately discover that it is Blake who helps us to understand ourselves.
John Higgs is the author of William Blake vs the World (his first book to be published in America) as well as other books published in Britain. John lives in England.
Praise for William Blake vs the World:

“Higgs’s writing is consistently clear and confident...rightly and persuasively emphasizing the primacy and power of the imagination in Blake’s work. It was fun to witness Higgs’s cogs turning, to hear his thoughts ricocheting against the walls of his internal archive of affinities, allusions and absorptions.”
— New York Times Book Review

"A journey into the iconic poet’s sensuous, idiosyncratic mythology. Besides offering perceptive close analyses of Blake’s work (including the art that illustrates this volume), Higgs locates him within the turbulent political and religious contexts of his times. Higgs makes an earnest case for the enduring relevance of Blake’s central argument: 'that the imagination is divine.' An appreciative, well-informed portrait."
— Kirkus Reviews

"For a thought-provoking and very accessible introduction to Blake, his work, and the complex mytho-poetic cosmology that he created, I can't recommend John Higgs' recent William Blake Vs the World highly enough. One of the best Blake explainer books I've read."
— BoingBoing

"Higg's enjoyable biography of William Blake is another welcome plea for the devil’s party."
— Arts Fuse

Praise from the UK for William Blake Vs. the World:

“[Higgs's] is a systematizing imagination, able to harness disparate elements and find the patterns that animate them.”
— The Financial Times

“A glittering stream of revelatory light. Conventional expectations are ripped to shreds. Higgs's prose has a diamond-hard clarity. He knows how to make us relate. Before long you will find you are examining yourself as much as you are examining Blake. Fascinating."
— The Times (London)

“Rich, complex and original, Higgs takes us to places that even Blake himself might have found surprising.”
— Tom Holland, author of Dominion

“Absolutely wonderful! This book managed to make Blake's mind and mythology understandable to me at last—for that I am truly grateful.”
— Terry Gilliam

“John Higgs's work is always revelatory and William Blake vs the World is no different. It is a dynamic book that makes Blake vivid and relevant but which also tells us a great deal about all human imagination. The subject is not only Blake, it is ourselves.”
— Robin Ince, author of I’m a Joke and So Are You

“Any careful reader must acknowledge the calm and the clarity of this spirited overview. Here is a guide who deserves to be seen as a contemporary Virgil, leading us around the circles of an inexhaustible theory of everything.”
— Iain Sinclair

“Laudable. We cannot understand Blake without understanding what he meant by imagination or taking seriously his visions. Higgs does this admirably, by exploring what we know about the mind while maintaining, for our secular times, the sacred quality of Blake's attention.”
— The Spectator

“Blake is a complete mystery to me, so I'm loving this book. You start to think: ‘Oh my God, that artist has been somewhere in my consciousness for the whole of my life, but I know absolutely nothing about them.’ There's a whole world just on my doorstep that I didn't realize existed.”
— Simon Russell Beale, The Observer (London)

“Higgs handles the complexities of Blake, particularly the later Blake, with adroit confidence, and in doing so he offers a crisp, ambitious and thoroughly contemporary introduction.”
— Times Literary Supplement

“[Higgs] handles the complexities of Blake, particularly the later Blake, with adroit confidence, and in doing so he offers a crisp, ambitious and thoroughly contemporary introduction.”