River Kings: A New History of the Vikings from Scandinavia to the Silk Roads (Hardcover) 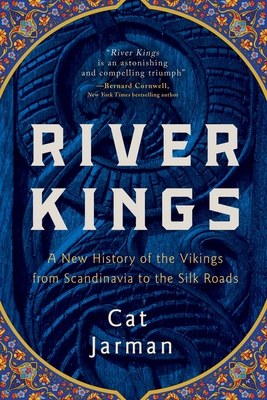 River Kings: A New History of the Vikings from Scandinavia to the Silk Roads (Hardcover)


Usually Ships in 1-5 Days
Follow an epic story of the Viking Age that traces the historical trail of an ancient piece of jewelry found in a Viking grave in England to its origins thousands of miles east in India.

An acclaimed bioarchaeologist, Catrine Jarman has used cutting-edge forensic techniques to spark her investigation into the history of the Vikings who came to rest in British soil. By examining teeth that are now over one thousand years old, she can determine childhood diet—and thereby where a person was likely born. With radiocarbon dating, she can ascertain a death-date down to the range of a few years. And her research offers enlightening new visions of the roles of women and children in Viking culture.

Three years ago, a Carnelian bead came into her temporary possession. River Kings sees her trace the path of this ancient piece of jewelry back to eighth-century Baghdad and India, discovering along the way that the Vikings’ route was far more varied than we might think—that with them came people from the Middle East, not just Scandinavia, and that the reason for this unexpected integration between the Eastern and Western worlds may well have been a slave trade running through the Silk Road, all the way to Britain.

Told as a riveting history of the Vikings and the methods we use to understand them, this is a major reassessment of the fierce, often-mythologized voyagers of the North—and of the global medieval world as we know it.
Cat Jarman, PhD, is a bioarchaeologist and field archaeologist specializing in the Viking Age and Viking women. She uses forensic techniques like isotope analysis, carbon dating, and DNA analysis on human remains to untangle the experiences of past people from broader historical narratives. Dr. Jarman has contributed to numerous television documentaries as both an on-screen expert and historical consultant, including programs for the BBC, History Chanel, Discovery, among others. She lives in Britain.
"Bioarcheologist Jarman debuts with an eye-opening look at how ancient silk roads linked Vikings to the Far East. Colorful storytelling and lucid explanations of archaeological science make this a vivid testament to the far reach of Scandinavian people and culture."
— Publishers Weekly

“An extraordinary new book about the expansion of Viking culture, not only to the West—into England, Ireland, and North America—but, more importantly, to the East, into Russia and the Middle East, which began in the seventh century CE. Jarman’s insight into the historical Rus/Ukrainian conflict and competition over the millennia brings a contemporary understanding to a long-standing set of geopolitical dynamics, particularly in this age of heightened tensions in the region. Her account of a thousand years of northern history also provides a welcome antidote to the oversimplification of the circumstances surrounding the Black Sea.”
— Milbry Polk

"A masterly history. River Kings is a mystery and an adventure, the tale of a quest that took Cat Jarman from Repton to Scandinavia, across the Baltic Sea, over to Baghdad and finally to India. I was held captive. In addition to being a wonderful writer, Jarman is a skilled bioarchaeologist. River Kings is like a classical symphony, perfectly composed and exquisitely performed. Tiny trills of detail give way to pounding drums of drama.”
— The Times (London)

“While opening up the eastern Viking Age to a general audience, Jarman also inducts the reader into the range and wealth of evidence with which Viking scholars grapple. A rich tale of discovery.”
— The Times Literary Supplement

"Cat Jarman will transform the way you think about the Vikings."
— Dan Snow, historian and television presenter

"A bead was discovered in a Viking warrior’s grave, and that discovery led Cat Jarman on an amazing journey which is described in this extraordinary story. That bead, in Cat Jarman’s hands, taught me more about the Vikings than a score of history books. River Kings is an astonishing and compelling triumph!"
— Bernard Cornwell, New York Times bestselling author

"Starting with an enigmatic carnelian bead, Cat Jarman reveals how her own research has contributed to a completely new understanding of the Vikings. A brilliantly, beautifully told story.”
— Alice Roberts, author, anthropologist, and television presenter

"An extraordinarily imaginative conjuring of the Viking world. This is not archaeology as dry stones and bones, but as the lived lives of the people of the past brought to life with verve, style and sympathetic imagination. Beautifully written. You’ll never see the Viking Age in the same way again.”
— Michael Wood, historian and author