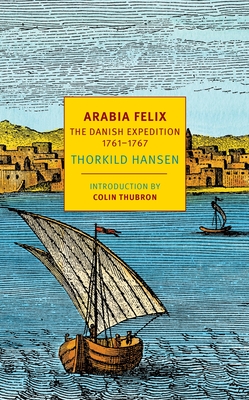 Arabia Felix is the spellbinding true story of a scientific expedition gone disastrously awry. On a winter morning in 1761 six men leave Copenhagen by sea—a botanist, a philologist, an astronomer, a doctor, an artist, and their manservant—an ill-assorted band of men who dislike and distrust one another from the start. These are the members of the Danish expedition to Arabia Felix, as Yemen was then known, the first organized foray into a corner of the world unknown to Europeans. The expedition made its way to Turkey and Egypt, by which time its members were already actively seeking to undercut and even kill one another, before disappearing into the harsh desert that was their destination. Nearly seven years later a single survivor returned to Denmark to find himself forgotten and all the specimens that had been sent back ruined by neglect.

Based on diaries, notebooks, and sketches that lay unread in Danish archives until the twentieth century, Arabia Felix is a tale of intellectual rivalry and a comedy of very bad manners, as well as an utterly absorbing adventure.

Arabia Felix includes 33 line drawings and maps.
Thorkild Hansen (1927–1989) was born in Ordrup, Denmark, and studied literature at the University of Copenhagen for two years before moving to Paris in 1947. In France, Hansen supported himself by writing dispatches for the Copenhagen-based tabloid Ekstra Bladet. He returned to Denmark in 1952 and published his first full-length novel, Resten er Stilhed (The Rest Is Silence) in 1953. Hansen would go on to write more than two dozen books, many of which drew on the historical record to interrogate Denmark’s record of imperialism, including Pausesignaler (Pause Signals, 1959); Jens Munk (1965), which won the Golden Laurel Award; a trilogy about the Danish slave trade (1967–1970), the final volume of which won the Nordic Council Prize; and Processen mod Hamsun (The Case Against Hamsun, 1978). He died aboard a cruise ship in the Caribbean in 1989.

James McFarlane (1920–1999) studied modern languages at Oxford and was the first dean of the school of European studies at the University of East Anglia. Britain’s preeminent Ibsen scholar, he edited the eight-volume The Oxford Ibsen, translating a number of the books himself. He and Kathleen Crouch were married in 1944.

Kathleen McFarlane (1922–2008) was a translator and a celebrated weaver and artist from Sunderland. One of her fabric sculptures hung in Norwich Castle for thirty years.

Colin Thubron is the president of the Royal Society of Literature. Among his books are The Lost Heart of Asia, Shadow of the Silk Road, and most recently, Night of Fire. He is also, with Artemis Cooper, the co-editor of The Broken Road, the final volume of Patrick Leigh Fermor’s Walking Trilogy.
"This tale of an 18th century scientific expedition gone awry (first published in Danish in 1962 and back out in a new English edition) is a brutal, beautiful story of human ideals – and all the clever ways we manage to muck them up. Part history, part fiction, part travelogue, this book balances its central tragedy with some winks and smirks. And yes, it's true: Before long, I found those pages practically turned themselves." —Colin Dwyer, NPR Book Concierge, "2017's Great Reads"

“First and foremost, Arabia Felix is just a terrific story: riveting, hilarious, exquisitely written and translated. Beyond that, however, it draws a rich and dynamic group portrait of a collection of philosopher-scientist-explorers at the very dawn of the modern era.” —Gideon Lewis-Kraus, author of A Sense of Direction

"The material that Thorkild Hansen has gathered for this book is as dramatic and colorful as anything....Arabia Felix is a first-class job.... Hansen has rescued from oblivion a fine story of adventure, discovery, death and endurance.... He has written a shrewd study of human character under severe stress." —Orville Prescott, The New York Times

"An epic voyage...unflaggingly readable and interesting." —Don Moraes, The Spectator

"A blend of historical chronicle and biography...Hansen’s absorbing chronicle of this expedition and its complicated background dramas is a splendid narrative told with literary distinction." —Edmund Fuller, The Wall Street Journal

"Thorkild Hansen...has written this so well that the reader is caught up in the problems of the expedition and travels with them slowly, sometimes dangerously as well as painfully.... This book reaffirms one’s faith in the ability of the human being as an observer with minimum equipment...fascinating to the general reader." —Lorrin Kennamer, Austin American-Statesman

"A scholarly and exciting account...an admirable writer, whose narrative energies [are] clear and dynamic...he tells it simply and well. Arabia Felix must appeal to anyone who enjoys reading of adventure and exploration." —Michael Adams, The Guardian