Reflections of a Nonpolitical Man (Paperback) 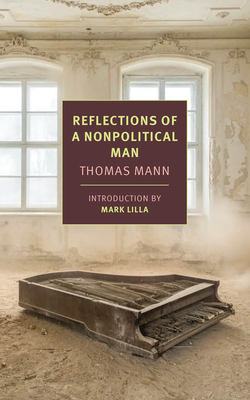 Reflections of a Nonpolitical Man (Paperback)


On Our Shelves Now
A classic, controversial book exploring German culture and identity by the author of Death in Venice and The Magic Mountain, now back in print.

When the Great War broke out in August 1914, Thomas Mann, like so many people on both sides of the conflict, was exhilarated. Finally, the era of decadence that he had anatomized in Death in Venice had come to an end; finally, there was a cause worth fighting and even dying for, or, at least when it came to Mann himself, writing about. Mann immediately picked up his pen to compose a paean to the German cause. Soon after, his elder brother and lifelong rival, the novelist Heinrich Mann, responded with a no less determined denunciation. Thomas took it as an unforgivable stab in the back.

The bitter dispute between the brothers would swell into the strange, tortured, brilliant, sometimes perverse literary performance that is Reflections of a Nonpolitical Man, a book that Mann worked on and added to throughout the war and that bears an intimate relation to his postwar masterpiece The Magic Mountain. Wild and ungainly though Mann’s reflections can be, they nonetheless constitute, as Mark Lilla demonstrates in a new introduction, a key meditation on the freedom of the artist and the distance between literature and politics.

The NYRB Classics edition includes two additional essays by Mann: “Thoughts in Wartime” (1914), translated by Mark Lilla and Cosima Mattner; and “On the German Republic” (1922), translated by Lawrence Rainey.
Thomas Mann (1875–1955) was a novelist, critic, and essayist who received the 1929 Nobel Prize in Literature. Born in Germany, he fled to Switzerland and then to California after Hitler’s rise to power in 1933, returning to Switzerland in 1952. His most influential works include Death in Venice and The Magic Mountain.

Walter D. Morris (1929–2001) was a translator and professor of German literature at Iowa State University.

Mark Lilla is a historian and professor of humanities at Columbia University. New York Review Books has published his The Shipwrecked Mind: On Political Reaction and The Reckless Mind: Intellectuals in Politics. He lives in New York City.
"′Reflections′ makes for a grimly fascinating read. Mann discloses as much of himself in its pages as in any of his autobiographical fiction." —Alex Ross, The New Yorker

“Reflections helps us to understand the problem that has not gone away: the dilemma of the intellectual (the writer, the artist) in politics.” —Walter Laqueur, The New York Times Book Review

“Without the impassioned patriotic document it is impossible to see Mann’s artistic and political development in the right perspective.” —Erich Heller

“[Reflections of a Nonpolitical Man] feels not just worthy of our attention but somehow indispensable. . . . The idea that we do damage to life’s most important elements when we use them instrumentally, for political ends, poses a real challenge to our moment, obsessed as it is with the political responsibility of the artist.” —Christopher Beha, The New York Times Book Review