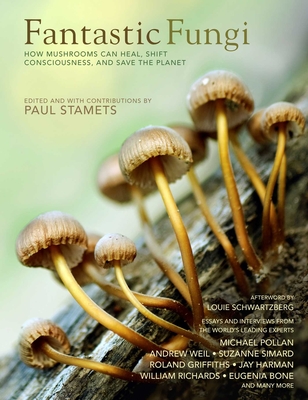 “Gorgeous photography! Time-lapse sequences of mushrooms blossoming forth could pass for studies of exotic flowers growing on another planet.”  –Joe Morgenstern, The Wall Street Journal

Viewed in over 100 countries and selling hundreds of thousands of tickets on the way to finishing 2019 with a rare 100% Tomato meter rating on Rotten Tomatoes, Schwartzberg’s documentary Fantastic Fungi has brought the mycological revolution to the world stage. This is the film’s official companion book, that expands on the documentary’s message: that mushrooms and fungi will change your life– and save the planet.

Paul Stamets, the world’s preeminent mushroom and fungi expert is joined by leading ecologists, doctors, and explorers such as Michael Pollan, Dr. Andrew Weil, Eugenia Bone, Fantastic Fungi director Louie Schwartzberg, and many more. Together these luminaries show how fungi and mushrooms can restore the planet’s ecosystems, repair our physical health, and renew humanity’s symbiotic relationship with nature.

EUGENIA BONE is a nationally known and award-winning nature and food writer. She has published over six books, and her work has appeared in many outlets, including the New York Times, Wall Street Journal, Saveur, and Food & Wine.

SUZANNE SIMARD is a professor of forest ecology at the University of British Columbia’s Department of Forest and Conservation Sciences in Vancouver, BC.

ROLAND GRIFFITHS, PHD, is a professor in the departments of psychiatry and neurosciences at the Johns Hopkins University School of Medicine. His research focuses on the behavioral and subjective effects of mood-altering drugs.

JAY HARMAN is a scientist, inventor, and entrepreneur dedicated to creating breakthrough technologies through biomimicry. He continues to conduct field research leading to new biomimetic products.

WILLIAM (BILL) RICHARDS, PHD, is a clinical psychologist at the Johns Hopkins School of Medicine, where he and his colleagues have pursued groundbreaking research with entheogens or psychoactive substances. He is the author of one book and dozens of academic articles.

ANDREW WEIL, MD, is a Harvard-educated world-renowned leader in the field of integrative medicine. Dr. Weil is the director of the Arizona Center for Integrative Medicine at the University of Arizona, has authored countless scientific articles, and has published over fourteen books.

For more than thirty years, best-selling author MICHAEL POLLAN has been writing books and articles about the places where nature and culture intersect. Pollan currently teaches at both UC Berkeley and Harvard University and lectures constantly around the world.