Olga Tufnell’s “Perfect Journey”: Letters and Photographs of an Archaeologist in the Levant and Mediterranean (Hardcover) 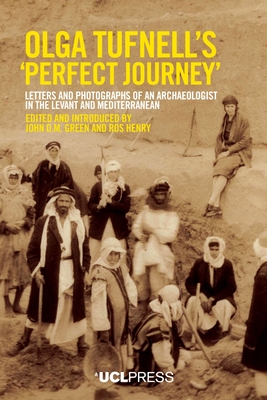 Olga Tufnell’s “Perfect Journey”: Letters and Photographs of an Archaeologist in the Levant and Mediterranean (Hardcover)


Special Order
A fascinating personal account of archaeology and travel in the interwar era in Palestine.

Olga Tufnell was a British archaeologist working in Egypt, Cyprus, and Palestine in the 1920s and 1930s—a period often described as a golden age of archaeological discovery. For the first time, this book presents Tufnell’s account of her experiences in her own words. Based largely on letters, the text is accompanied by dozens of photographs that shed light on her personal experiences of travel and dig life at this extraordinary time. Introductory material by John D.M. Green and Ros Henry provides the social, historical, biographical, and archaeological context, as the letters offer new insights into the social and professional networks and history of archaeological research in Palestine under the British Mandate. They provide insights into the role of foreign archaeologists, relationships with local workers and inhabitants, and the colonial framework within which they operated during turbulent times. This book will be an important resource for those studying the history of archaeology in the Eastern Mediterranean, particularly for the sites of Qau el-Kebir, Tell Fara, Tell el-‘Ajjul and Tell ed-Duweir (ancient Lachish). Moreover, Tufnell’s lively style makes this a fascinating personal account of archaeology and travel in the interwar era.

John D.M. Green is associate director of the American Center of Oriental Research in Amman, Jordan.

Ros Henry was Olga Tufnell's assistant at the Institute of Archaeology at University College London.
"As any archaeologist will tell you, being an eyewitness to discovery, especially something that might rewrite history, is a special thrill. This was the case for Olga Tufnell, a British archaeologist who worked on three major digs in southern Palestine during the 1920s and 1930s: Tell el-Far‘ah (South), Tell el-‘Ajjul, and Tell ed-Duweir (ancient Lachish). Her letters and photographs from this time are presented in a new book, Olga Tufnell’s ‘Perfect Journey’, sharing aspects of dig life, travel, and personal and professional networks"
— Bible History Daily