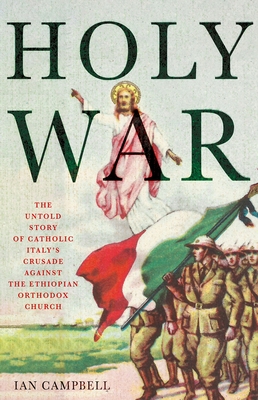 
Usually Ships in 1-5 Days
In 1935, Fascist Italy invaded the sovereign state of Ethiopia--a war of conquest that triggered a chain of events culminating in the Second World War. In this stunning and highly original tale of two Churches, historian Ian Campbell brings a whole new perspective to the story, revealing that bishops of the Italian Catholic Church facilitated the invasion by sanctifying it as a crusade against the world's second-oldest national Church. Cardinals and archbishops rallied the support of Catholic Italy for Il Duce's invading armies by denouncing Ethiopian Christians as heretics and schismatics and announcing that the onslaught was an assignment from God.
Campbell marshals evidence from three decades of research to expose the martyrdom of thousands of clergy of the venerable Ethiopian Church, the burning and looting of hundreds of Ethiopia's ancient monasteries and churches, and the instigation and arming of a jihad against Ethiopian Christendom, the likes of which had not been seen since the Middle Ages. Finally, Holy War traces how, after Italy's surrender to the Allies, the horrors of this pogrom were swept under the carpet of history, and the leading culprits put on the road to sainthood.

Ian Campbell is an independent scholar and international consultant. He has written several books on the Italian occupation of Ethiopia, including The Addis Ababa Massacre: Italy's National Shame, also available from Oxford University Press. It was a Financial Times History Book of the Year (2017), and has been published in Italian translation.