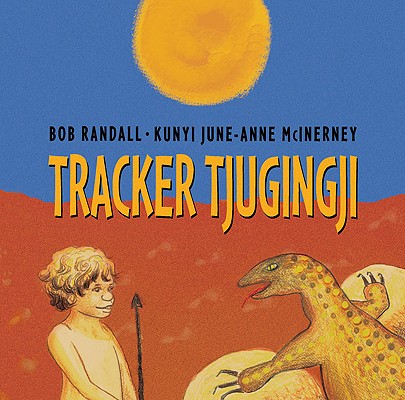 
Special Order
Tracker Tjugingji lived out bush with his family. They camped in little windbreak shelters, and Tjugingji used to sleep on the ground next to his parents. One time Tracker Tjugingji's parents decided to go to a big lake, a long way east of where they were camped... Tjugingji wanted to go too, but he didn't expect the trip to be quite such an adventure. This book also includes a CD of The Animal Song, a lively tune about kangaroos hopping, dingoes howling and big emus walking.
Bob Randall is a Pitjantjatjara man from the Kings Canyon area of Central Australia. He lived there with his mother's people until he was 'taken away' when he was 8 or 9 years old. Bob was sent from Alice Springs to Minjala (Croker Island), far from his desert home, off the north coast of Arnhem Land. Bob is a well-known storyteller and songwriter. His haunting song 'Brown Skin Baby' has won many awards. Kunyi June-Anne McInerney is of Yankunytjatjara descent and was born at Todmorden Station near Oodnadatta in 1951. Kunyi has a Bachelor of Arts (Aboriginal Studies) from the Univeristy of South Australia. She has been an artist in residence at Flinders University, and her paintings are held in public collections throughout Australia, Europe and the United States. Kunyi also illustrated Jukurrpa Books’ children’s story Down the Hole.