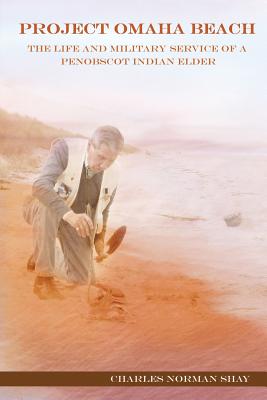 
On Our Shelves Now
The author is a direct descendent of the adventurous Baron Jean-Vincent d'Abbadie de Saint-Castin (immortalized by Longfellow) and Pidianiske, daughter of Penobscot Chief Madockawando. Feted as a veteran of the liberation of Europe, Charles Shay unexpectedly finds himself in the footsteps of his French ancestry, being received in Basque villages, in the region of Castine (184 illustrations). "Charles Norman Shay is a Penobscot Indian elder at Indian Island, Maine. Born in 1924, he enjoyed his childhood years living on this small island in the Penobscot River, opposite Old Town. He is the grandson of the author of The Life and Traditions of the Red Man (1893), Joseph Nicolar, and proud of his heritage. Reviewing his own long life, he decided to share his personal story as a result of a pilgrimage he made to Omaha Beach in 2007, more than sixty years after he waded ashore as a nineteen-year-old combat medic in a 1st Division assault platoon in the first wave of D-Day. He has received much recognition for his contribution to the war effort, including the Legion of Honor from the French president. In this memoir, the author offers us a window into his personal life so full of unexpected twists and turns that took him across the globe." -Dr. Harald E.L. Prins, University Distinguished Prof. of Anthropology, Kansas State University.