Essays on the Self (Classic Collection) (Hardcover) 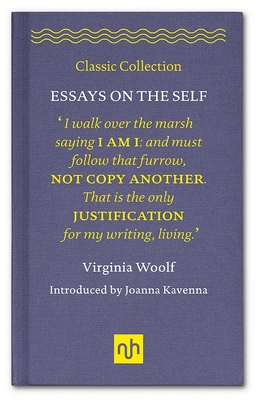 Essays on the Self (Classic Collection) (Hardcover)

The Notting Hill Editions Classic Collection series brings together the great essayists of the past, introduced by contemporary writers. Essays on the Self is a surprising collection spanning twenty-one years of Virginia Woolf’s life, from the ages of thirty-seven to fifty-eight, the year before her suicide. The question of the self is central, in some way, to every essay in this book. Whether she is discussing the rights of women, the revolutions of modernity, social inequality, or the future of the novel, Woolf acknowledges that a writer’s task is to find a unique self through which to view the world. The thirteen essays are introduced by the novelist Joanna Kavenna.
Virginia Woolf (1882–1941) was an English novelist, critic, and publisher who became a key figure of literary modernism. She published many novels as well as nonfiction and criticism. In 1941, she committed suicide by drowning herself in the River Ouse, near her Sussex home.

Joanna Kavenna is a British novelist and travel writer. Her works include The Field Guide to Reality The Ice Museum, Inglorious, and The Birth of Love. Her short stories and essays have appeared in The New Yorker, the London Review of Books, Arc, The Guardian, and The New York Times. She has received the Alistair Horne Visiting Fellowship and the Orange Prize for New Writing, and in 2013 was named as one of Granta’s Best of Young British Novelists. She lives in Oxford.
"The book explores the idea of the self in a very thought-provoking way and is a real treat for Woolf fans who like to analyze the more complex themes and ideas in her works.” —Virginia Woolf Blog

“Underpinning all of the essays is the question of what it means to have a sense of self. A question that, in the age of the selfie, seems utterly topical.” —Julia Bell, Writers’ Hub, University College London

“The essays...are sublime moments in intellectual history, while also being entertaining and accessible.” —Shiny New Books