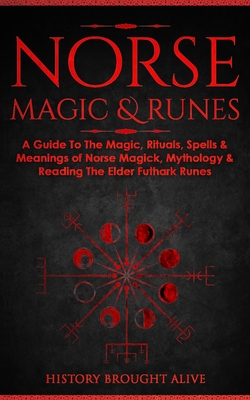 A snowy wind moves through the mountains encircling Arne and his son. But the winds will not reach them here, under the watchful eyes of their Gods...

Welcome to The World of Norse Magic & Runes

Let us take you back in time. When the Norse people lived in an enchanted and sacred world. A time famously shrouded in mystery, magic, sorcery and witchcraft.

It was Odin himself, the wisest God who unlocked the universe's most powerful magic. He discovered the Runic alphabet as part of his trial, in which he hung from Yggdrasil, the World Tree, for nine days.

Nowadays, Runes & Norse Magic are used as a method of connecting to one's higher self. Or as a way of foretelling what the future may hold. Now don't worry because you don't have to be of Norse ancestry to use them. However you'll have a far better understanding of them, history, mythology, meanings and more through reading this book.

Inside you will discover:

Whether you are simply hungry for the history and mythology of the Norse, or you are beginning to master the magic arts, then you will receive valuable information from this precious book.

So without any further ado, Read This Book