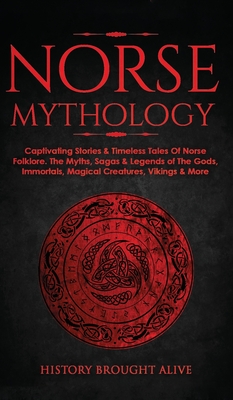 As the droplets from Niflheim mixed with the fiery depths of Muspelheim, a phenomenon occurred...

Norse Mythology is truly fascinating, it is no wonder Hollywood, writers, and game studios have jumped on the bandwagon. Whether it be influence over The Marvel blockbusters, The Lord of the Rings, Game of Thrones, God of War and more.

The Tales are Epic, The Battles are Fierce & The Drama is Plentiful

Join us on a discovery to the Marvels & Wonders of Norse Mythology, and learn from one of the most interesting civilizations ever known - The Vikings.

At History Brought Alive, we are history and mythology enthusiasts who are fascinated with the secrets ancient beliefs, customs, traditions, and myths hold.

As you journey through this book, we will help you peel back the layers of history that surround these fascinating stories to take a peek at the accurate accounts of the myths, beliefs, customs, and traditions as they actually were.

In this book you will discover:

As you embark on this journey, imagine yourself following in the footsteps of Odin.

Odin is willing to let go of a reality, in order to be allowed to drink from the well that contains all the wisdom of the world.

We welcome you to do as Odin... let go and drink deep from the well of wisdom.